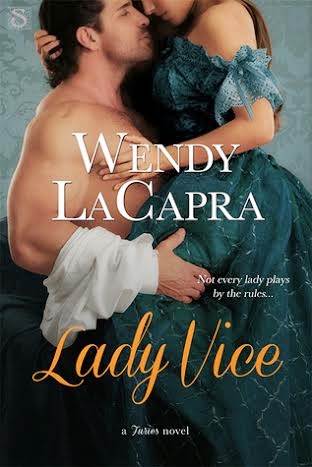 
Not every lady plays by the rules.


Lady Lavinia Vaile knows what happens to a woman who puts her faith in society. For her, it was a disastrous marriage to a depraved man-one she threatened to shoot when she left him. Now Lavinia lives outside of society’s strict conventions, hosting private gambling parties. It’s only when her husband is shot dead that Lavinia finds herself in terrible danger…


A former judge in India’s high court, Maximilian Harrison will do anything he can to help Lavinia. In the darkest of times, he held on to thoughts of her and the love they once shared. Now he risks his own position in society―along with his ambitions―in order to clear her name. Yet as desire reignites between them, Lavinia remains caught up in secrets and shame. Her only salvation is to do the unthinkable…and trust in both Maximilian and love.

Excerpt One
Beginning
Maximilian Harrison’s heart beat for a single purpose: get to Lavinia.
“You will let me pass.” He trapped the lone man guarding the private gambling salon against Lady Sophia’s garden gate.
“But you do not have an invitation. And Lady Sophia does not allow uninvited—”
“You misunderstand.” Max placed a hand on the guard’s shoulder. “I don’t give a damn about Lady Sophia or her rules. I must speak with Lady Vaile.”
Time was tying a hangman’s noose. Already, dawn cast shadows into the mist.
He’d fought his way to the outskirts of London. He’d scaled the outer wall of Lady Sophia’s infamous mansion. He’d dashed through her courtyard like a hunted thief. He had no desire to hurt the guard but, by God, he would not be turned away.
In the space between their bodies, the guard’s grip on his musket tightened. Chilled air stung Max’s teeth. Firearms didn’t frighten Max. If they did, he would have died in that hell-scented cell in India.
A tremor ran through his fingers. Focus. Thirty seconds, perhaps less, and he could have the guard spitting dirt.
No. Destroying him is not necessary. Nor is breaking his bones.
“Lady Vaile is in danger. Unless I warn her, she, and your mistress, will suffer. Open the gate,” Max ordered. “Now.”
Faint lamplight illuminated the flush spreading up from the guard’s neck as his gaze darted toward the garden.
“Go, then.” He unlatched the gate. “But cause trouble and you will pay.”
Max stilled his curling fist. He stepped inside and, with a calculating gaze, surveyed the garden and the gamers within.
So this was the Furies’ lair.
He’d heard fantastical tales of the private salons hosted by the three ladies collectively known as the Furies—Lavinia, now Lady Vaile, and her friends Lady Sophia and Her Grace, Thea Marie, Duchess of Wynchester.
Marriage-minded misses clamored to obtain Almack’s vouchers, but every aspiring rake coveted an invitation from the Furies. And, clearly, invitations had been sent to every dandy, wastrel, and libertine in London.
Maids, not footmen as custom dictated, served guests in costumes accented by silken wings. Miniature cherubs hung from tree branches.
Angels—he snorted—a clever thumb in the face of the hostesses’ sobriquets: Lady Vice, Lady Scandal, and Duchess Decadence.
Around a nearby table, men chanted in unison. “Place the card, place the card!”
Max shouldered through coats of velvet and caught his first sight of Lavinia in years.
She did not look like a fury—all darkness and fear. Haloed in the pale pink glow of early dawn, she appeared almost as innocent as the girl he had courted all those years ago. She still commanded the colors of autumn. Her skin glowed like ripened wheat and her smoky lashes rimmed eyes as brown as spiced ale. A man could become forever mired in those depths, enraptured and entombed.
He blinked to quell the sudden burn in his eyes, a natural result of coal soot and sleeplessness, undoubtedly.

Lady Vice by Wendy LaCapra
My rating: 5 of 5 stars


Vice by Wendy LaCapra is a 2015 Entangled: Scandalous publication. I was provided a copy of this book in exchange for a honest review.

This story is an edgy historical romance with a darker tone and I for one am happy to see some stories with a little more depth for a change.

Duty, honor, and trust are the themes that run through out this story. Max went away to secure a more stable future for Livinia, only to find himself held prisoner in India. While he was away his fiance' marries another man. However, he worked for Livinia's parents and was like a son to her father despite Livinia's marriage and subsequent fall from grace, which resulted in an estrangement from her family. So, when she is accused of murder, Max sets out to clear her name... after all it was his duty.

Livinia' marriage was a ghastly nightmare and she has managed to leave her husband, but has been cast out of society. She is now working in vice- hosting gambling parties with several other women. When her husband is murdered and Livinia becomes the primary suspect, the man she has blamed for all her troubles, Maximilian Harrison comes to her rescue, promising to stand by her until they get to the truth and her name is cleared. But, she doesn't allow herself to believe for one moment that he is helping her for any other reason but his feelings of duty towards her.

Max suffers from PTSD but he doesn't know how to label this malady, so he soldiers on without saying much about his fear of closed in places and panic attacks, refusing to let them control him. As difficult as this is to live with, it's his broken heart that he suffers from most of all.
Livinia's abuse has left her emotionally damaged, bitter, cynical and hardened , especially towards the opposite sex. Is it possible these two wounded souls can come together once again and begin the healing process together, or will their differences of opinion keep them from gaining back all they lost?

I love a light regency romp as much as the next person, but lately it seems all the regency period historical romances are exactly alike and I find myself stifling a groan every time I pick one up and it's more of the same old, same old. I don't like to read super dark novels all the time either, but I am so pleased to see historical romance authors dipping their toes into deeper waters and tackling difficult issues. The author does this and still manages to stay true to the period. I actually learned some things about this period of time I had never heard of before, like wife auctions, the poorer classes way of ending a miserable marriage.

The mystery was intriguing and a few unexpected twist come into play along the way. Our baddie is truly one sick puppy. However, there are still some loose ends to tie up and it looks like Livinia's friend Sophie will have to pick up the slack in the next installment.
Although the storyline is a little more menacing, the romance is doesn't suffer from that. The story still has some really sweet and sexy moments.
Max was someone I could fall in love with easily, his character is just so sweet and despite everything, pure, although at times his dialogue leaned toward the “flowery” side. Livinia has a harder road to travel, and at times I thought she was too hard on Max, but now that the enemies are at bay, at least for now, the couple can begin work on the future they were robbed of in their youth. 4.5 rounded to 5


Wendy LaCapra has been reading romance since she sneaked into the adult section at the library and discovered Victoria Holt & Jane Aiken Hodge. From that point on, she dreamed of creating fictional worlds with as much richness, intrigue and passion as she found within those books. Her stories have placed in several contests, including the 2012 Golden Heart®. She lives in NYC with her husband and loves to hear from readers.