This post is part of a virtual book tour organized by Goddess Fish Promotions. A winner randomly drawn via Rafflecopter will receive a $20 Amazon or BN.com gift card. Click on the tour banner to see the other stops on the tour.

How far will collateral damage from a CIA drone strike reach?

When a suicide bomber shatters the peace of a winter afternoon on the National Mall in Washington, D.C., former pilot and undercover Cerberus operative Nick Baron receives an eerie invitation from the chess app on his phone—a mysterious figure named The Emissary wants to play.

Nick and his covert unit—the Triple Seven Chase team—soon find themselves drawn into battle against an unknown opponent who has resurrected an ancient order of assassins: the legendary Hashashin. And there is a long-awaited prophecy being fulfilled by a series of violent attacks which may culminate in a final apocalypse over Jerusalem.

As the Triple Seven fight to stop each attack, Nick tries to keep The Emissary on the hook by playing their digital chess game. The lines between the game and the fight begin to blur, as every time Nick loses a piece on the board, he loses one of his men. And if Nick cannot find a way to stop the terrorist mastermind, a checkmate may kill millions…

The Christmas decorations are up. That was the first thought that passed through Nick Baron’s mind as he walked beneath the grand arched entrance of Washington, DC’s Union Station. He was six feet tall and plainly dressed in a brown leather jacket and faded jeans. His wife, Katy, walked next to him, pushing a stroller. She was more elegantly dressed, still resisting the inevitable soccer mom persona. Her auburn hair fell to her shoulders beneath a stylish winter cap. She wore jeans as well, but they were midnight blue and fit her slender form snugly, descending into high-heeled riding boots. Katy was enjoying her afternoon. Nick was not.

His attention to the Christmas decorations did not spring from a yuletide appreciation for the thirty-foot tree in the main hall or the lighted garlands that adorned every horizontal surface, or amusement at the model-train displays stretching across the usually empty floor space. He took notice of the decorations because they cluttered the station, and clutter in public spaces made him uneasy.

They paused in front of the welcome center, a two-story island of cherrywood in the center of the marble hall. While Katy checked the marquee, Nick’s steel-blue eyes roamed the crowded station. Smaller versions of the central Christmas tree created shadows in every corner and alcove. Rows of poinsettias and ten-inch riser skirts masked the empty spaces beneath the model trains. All the extra floor displays compressed the heavy holiday traffic into nicely segmented kill zones. What a nightmare.

“You’re doing it again,” said Katy, letting out a little oomph as she thrust Luke’s stroller into motion again. “I can see it on your face, the way your eyes are moving. Relax. This is family time. You’re off duty.”

“We could have had family time waiting in the car at the passenger pickup,” he replied, still searching rather than looking at his wife. “You know I hate train stations. They’re death traps.”

Other terms used by Nick’s colleagues in the counterterrorism community were low-hanging fruit and easy pickin’s. In the post-9/11 world, airports had become ultrasecure, with the latest in screening technology and mountains of rules. In some countries, getting to the aircraft with so much as a toothpick was a challenge. Train stations, on the other hand, remained largely unchanged. Most didn’t even use metal detectors. Over the past thirteen years, train lines and their unions worldwide had lobbied hard to keep security lax, in hopes that a public frustrated with being poked and prodded at airports would switch to railways for their domestic travel. Their efforts succeeded in attracting a few extra passengers. They also attracted terrorists in droves.

Since September 11, 2001, eighty-nine people had died in terror attacks against airliners, all of them in a coordinated attack on Russian commuter planes by Chechen Muslims. In the same period, nearly one thousand people had been killed and around five thousand wounded in attacks against railways. Britain, Spain, Russia, no country was immune. Maybe train bombings didn’t get the attention they deserved because the body counts weren’t high enough, but one day that would change. One day, probably in the United States, some group of radicals would find a way to use the rail system to make a big splash.

Nick quickened his pace and steered Katy toward Platform C, where his father’s train was supposed to arrive. As they passed the midconcourse shops, he spied a rolling suitcase sitting by itself, tucked halfway behind one of the little Christmas trees. A security guard a few feet away was too busy gawking at a pair of attractive young window shoppers to notice.

As Nick started toward the bag, a man in a business suit came out of the Starbucks and reclaimed it. He strolled away, oblivious, nursing a venti nonfat sugar bomb.

“There he is,” said Katy, tugging Nick back the other way.

Dr. Kurt Baron emerged from Platform C with two small suitcases. He raised one of them in a half wave.

Thanks to strong genes, the older Baron shared Nick’s medium build and youthful features, but where Nick’s hair was thick and golden blond, his dad’s was thin and dark, turning gray. And now it seemed his father had decided to grow a goatee. It looked absurd.

“I told him not to wear that Go Air Force sweatshirt when he travels,” he muttered to Katy. “It makes him a target.”

“Be nice. You promised no fights.”

“He’s only wearing it because I told him not to.” 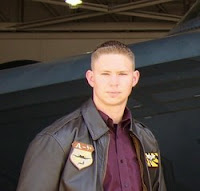 James R. Hannibal is a former US Air Force Stealth Bomber pilot with over a thousand hours of combat experience including over-watch, close air support, and HVI captures. He graduated from the US Air Force Academy in 1997 with a bachelors of science in Middle

Eastern Studies and earned a masters of science from Central Missouri State University in Aviation Safety Sciences. His flying career included the A-10 Warthog, B-2 Stealth Bomber, MQ-1 Predator, T-38 Talon, T-37 Tweet, and the Boeing 737, 757, and 767. When he is not flying or writing thrillers, James occasionally reviews for the New York Journal of Books.