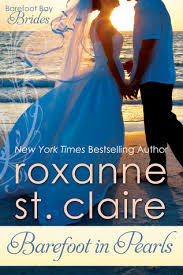 A brand new full length (365 pages) set in Barefoot Bay! New York Times bestselling author Roxanne St. Claire takes readers back to the beach with more of the “Barefoot Brides” -- destination wedding planners who are experts at dreamy “I do’s” but haven’t yet found their happily ever after.

As her two best friends settle into their happily ever afters, destination wedding designer Arielle Chandler is beginning to wonder if the promise of “The One” – one true love, meant only for her – is merely folklore passed down from her Native American grandmother. But when a mysterious man nearly mows her down on a hill overlooking Barefoot Bay, the legend of destined love suddenly feels very real. That is, until Ari learns of Luke McBain’s plans to demolish a piece of land she believes is sacred.

Luke isn’t proud of the fact that he spent ten years as a mercenary warrior, fighting battles for another country. With those dark days behind him, he’s focused on creating a new life instead of destroying others, so he’s moved to Barefoot Bay to launch a contracting business and build a house for an old friend. But when an enigmatic dark-eyed beauty steals his attention and stops his progress with her announcement that he is about to flatten a native burial ground, Luke has a new battle to fight.

While their immediate and potent attraction grows complicated, Luke and Ari discover the hills of Barefoot Bay could be hiding something far different – and even more valuable – than ancient art or graves. They are determined to discover the truth, but that will come at a cost. Will they risk their chance at once-in-a-lifetime love to uncover secrets that could change the landscape of Barefoot Bay forever? 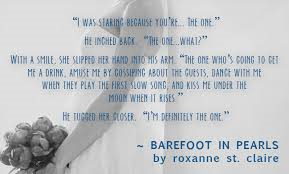 Barefoot in Pearls by Roxanne St. Claire
My rating: 5 of 5 stars

Barefoot in Pearls by Roxanne St. Claire is a 2015 South Street Publishing release. I was provided a copy of this book in exchange for an honest review.

This is the third in the Barefoot Bay Brides trilogy, but can be read as a stand alone.

Karma, Fate, Destiny, call it what you will, but Arielle and Luke were meant to be. The instant Luke ran right over Ari and their eyes met, she knew... Luke was “ the one”. Don't believe in love at first sight? This story just might change your mind.

Ari is one quarter American Indian. She had a very close relationship with grandmother- “Grandma Good Bear”. She promised her grandmother she would wait for the right guy, “the one”, and so for two years she has been celibate. But, both of her best friends are now either married or about to be, and she is really starting to wonder if that guy is ever going to show up.

Luke really knows how to make an entrance into a person's life. While Arielle thought their meeting was proof her intuitions were right, Luke looked at it as mere coincidence. While Ari was convinced he was the one she has been waiting for, Luke is hell bent on avoiding anything that resembles love. That's not all that is impeding their relationship though. Luke is about to begin work on a piece of land that Arielle believes could be sacred. Luke needs the work, putting Ari in a difficult spot. Determined to do the right thing, Luke stalls the project.
In the meantime, he and Ari have some investigating to do, as well as some hard core soul searching.

I really enjoyed this story. Arielle, named after “The Little Mermaid”, has “feelings” about things and people that are uncanny, and while she isn't always right, for the most part she has a real knack for reading people. She is kind of offbeat, but is principled and sticks by those beliefs even when they are not popular, which I really admired.

Luke.. well my goodness! This guy's back story is really something. It's no wonder he is a little shy about getting involved with anyone. So, he fights against Ari's feelings that they belong together. One part of him knows she is right, but the other part of him is too afraid to admit it. He winds up being his own worse enemy sometimes.

The Native American backdrop was a nice touch. I love cultural stories because they add a deeper level of interest.
I also enjoyed the level of suspense when it seems Ari's probing may have stirred up some trouble for herself and Luke. What was on that piece of land that someone didn't want discovered and to what lengths would they go to keep Ari from upsetting their plans?

So, this story has a little something for everyone. A sweet and sensual love story, danger and suspense, and a little bit of a paranormal element, as well as humor. Luke can be really funny especially when trying to keep names straight. I loved, loved, loved the deeply romantic ending, giving all the naysayers out there regarding soul mates and love at first sight something to think about. 5 stars! 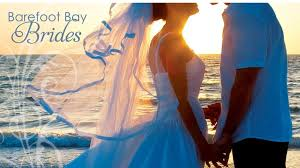 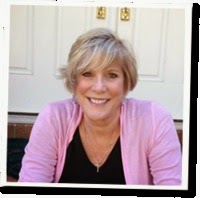 I don’t know about you, but when I check out an author's bio, it’s usually because I’ve read a book I liked and wondered about the person behind it. Let's skip the formal bio and I'll give you the inside scoop on who Roxanne St. Claire really is.

First of all, call me Rocki. Everyone does. Evidently, when my mother brought me home from the hospital I seemed too scrawny and small to pull off “Roxanne” (she’d read Cyrano de Bergerac while pregnant or I would have been Judy) so they called me Rocki.

I grew up in Pittsburgh, PA, the youngest of five (overachievers, every one), and fell in love with words and stories the summer I read Gone With The Wind. That year, for my twelfth birthday, my parents gave me a typewriter (with italic font – it was the coolest thing) and from that day on, I’ve had my fingers on a keyboard, pounding out love stories for fun. My AP English teacher taught me the two most important lessons an aspiring author ever needs: 1) verbs are the key to life and 2) a writer should get a real job. After attending UCLA and graduating with a degree in communications, I tried acting and television broadcasting. Oh, they aren’t real jobs? I learned that the hard way. I changed my last name from Zink to St. Claire because a news producer told me Roxanne Zink had too many harsh consonants for a TV personality – apparently Katie Couric didn’t get the memo. I got some fun gigs, and even met Tom Hanks when I did a guest appearance on Bosom Buddies. I liked on camera work, but wasn’t too crazy about starvation, so I moved to Boston and got that “real” job. In fact, I placed my foot on the bottom rung of the corporate ladder and didn’t look down until I’d climbed all the way up to the level of Senior Vice President at the world’s largest public relations firm. On the way up, I met the man of my dreams in an elevator. Two years later – in the same elevator! – he asked me to marry him and I wisely said yes.

I stayed in PR, moved to Miami, had a few babies, lost my home in a hurricane, built another one a few hours north and all along, I kept writing my “stories” for fun. One night, I read a particularly fabulous romance novel that changed my life for good. That night, I decided I wanted to make someone else feel as whole and happy as that author made me feel. (Everyone asks! It was Nobody’s Baby But Mine by Susan Elizabeth Phillips.) With two small children and one big “real” job, writing my first novel wasn’t easy, but I did finish a manuscript that managed to get the attention of a literary agent. She told me to do one thing and one thing fast: write another book. (The first one is usually a “learner” book, honestly.) That second manuscript sold to Simon & Schuster’s Pocket Books and was released in 2003 as Tropical Getaway. Since then, I’ve written almost thirty more, in multiple genres, and long ago replaced the corporate ladder with the rollercoaster of publishing as a full-time novelist. Finally, writing is my real job.

Today, I live in a small beach community in Florida with my husband and our two teenagers, and one spectacular Australian Terrier named Pepper. When I have spare time, I spend it with my family, but also dig in the dirt with my plants, travel for business and fun, hang out with my many writer friends, and, of course, I love to read. I’m still crazy about words and stories and hope to write at least a hundred books in my lifetime. And, yes, verbs are the key to life. My favorites? Love. Work. Play.
Posted by gpangel at 12:30 AM