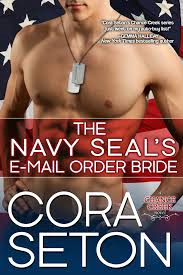 Mason Hall, Navy SEAL, knows all about difficult assignments, but his current mission is one for the record books. Not only must he find a wife—and get her pregnant—or forfeit the ranch his family has prized for generations, he must also convince his three brothers to marry, too—before the year is up. Who knew one city girl and three wayward brothers could put up such a fight?
MY REVIEW:

The Navy SEAL's E-Mail Order Bride by Cora Seton
My rating: 4 of 5 stars

The Navy Seal's E Mail Order Bride by Cora Seton is a 2014 One Acre Press publication. I was provided a copy of this book by the publisher and Netgalley in exchange for an honest review.

I confess up front that I love military heroes and cowboys better than any other romance hero. I really enjoyed The Cowboys of Chance Creek and am super excited to see this new series featuring Navy Seals.

When Mason and his brothers discover that in order to keep the family ranch their eccentric aunt is willing to sign over to them upon her death, instead of their cousin, they agree to go along with her rather odd stipulation. The brothers must marry and have children right away. Since Mason is about to be discharged from his military duties it only makes sense he marry first and get started on making babies. This prompts him to take unconventional measures to find a bride.

Regan reads the ad Mason places regarding his need for a bride, she begins an online chat with him mostly being a little sarcastic. But, when he answers back they being exchanging emails which leads to Skyping.

Since Regan is desperate to have children, but with no lover, boyfriend or husband in her life she has made the decision to seek alternative ways of having a child. But, Mason could offer Regan a way to have a family the traditional way.. well almost.

Mason and Regan's arrangement may have been a little out of the ordinary but Regan would have the child she so desperately longed for and Mason would still have his ranch.


Naturally, there are a few bumps in the road with unexpected debts, and lots of hard work to do on the ranch, brothers who are less than interested in getting married and convincing Regan to at least give things a try with Mason.


This first book in the series did not disappoint. Regan and Mason exchanged such funny and charming emails which is what got me hooked into the story, but then when Regan arrives on the ranch she begins to see that just maybe this is life could offer her all she ever wanted. Mason is a great guy with a lot on his plate. He accepts what he has to do to achieve his goals and keep the ranch, but he never expected to find love in the process. Both these characters grew, not only in the responsible mature way one must at some point in your life, but mentally and emotionally too. This was a delightful couple and I cheered them on from start to finish. Cora Seton writes wonderful contemporary romances centered around family that makes you laugh, cry, and feel like you are part of that family. This first book is a strong introduction to the series and I am really looking forward future installments. 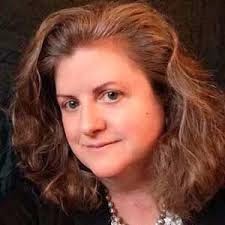 Cora Seton loves cowboys, country life, gardening, bike-riding, and lazing around with a good book. Mother of four, wife to a computer programmer/eco-farmer, she ditched her California lifestyle eight years ago and moved to a remote logging town in northwestern British Columbia.

Visit www.coraseton.com to read about new releases, locate your favorite characters on the Chance Creek map, and learn about contests and other cool events!
Posted by gpangel at 12:00 AM