Leap Into The Knight by M.J. Schiller Spotlight+ Review+ Giveaway

Sir Darius Lee is a Knight of the High Order.
But when Darius discovers a stranger in his room in the middle of the night, and the intruder turns out to be a beautiful woman, he begins to question how he is meant to live his life.
Princess Megan of Bethyea is being held captive.
But when two knights help her to escape and bring her back to her home planet, she finds the home she knew no longer exists.
When The Council of Twelve questions Darius about his relationship with Maggie, she tries to flee from The Academy of the High Order to prevent him from losing his knighthood.
Will Darius and Orion find Maggie before she leaves Albion? And if they do, how can they face the decision of The Council? And what about the feelings Orion has developed for the princess?

***
Her heart was racing madly. What was she doing? She should run. She should run as fast as she could, or at least search about the room for a way out.
She sensed him there behind her, though she heard no sound. Her immediate instinct was to flee, as well it should be. After all, she was on the run from a half dozen guards. It was only by ducking into this room a few moments ago that she avoided capture. In spite of all that, she now sat on a couch with the man. It was totally incomprehensible to her, trusting him. She learned the costly lesson of trusting in the goodness of men long ago. But when she scrutinized his face as he peered at her on the floor, she had been filled with an unfathomable sense of calm. It was the most bizarre feeling. All logic, all of her past experiences said to get out as swiftly as possible. But here she was, sitting next to this man as if it was teatime and not the middle of the night in a room where he discovered her hiding. She guessed him to be five or six years older than she. His face was strong, but kind, almost noble, and his deep, dark eyes were compassionate, with a hint of wisdom. It was the kind of face one could trust.
“Now,” he began slowly, ”why don’t you tell me exactly what you’re doing here?”
She was saved from figuring out an answer for his question by a young man who came barreling out of the door behind him. He brandished a laser-sword, yelling as he entered, “Master! I’m here!” The suddenness of the action startled them both.
The man turned slightly to say, “Orion, deactivate your weapon,” and that was all she needed. Her fear returned and catapulted her off the couch and toward the door. She hit the keypad with a force that sent a shock wave rippling up her arm, and was on the other side as soon as it opened wide enough to allow her small frame through. Once on the opposite side, she started pounding on the keypad there, and was able to effectively disable the door for a moment, enough time to search the hallway for a path of escape.


Four Copies of An Uncommon Love

Princess Adriana had her life all figured out…
Or, to be more precise, she had her life all figured out for her. Before she was even born she was betrothed to Garin, and that was perfectly acceptable as he became her childhood friend, and then, eventually, the person she would swap kisses with inside the palace gardens. She never questioned it, never had a reason to, until the day a commoner was brought before her father, the King, to be punished.…until the day her eyes conncected with blacksmith Seth Hobb’s across a stone courtyard.When he creeps into the castle at night to thank her for freeing him, they begin to build a relationship with one another that is often as explosive as it is endearing. But fate ends up separating the two and they must undertake a long and arduous journey to be reunited.
But with everything against them, can an uncommon love like theirs survive?
Even then, can Adriana make Seth see her for herself and not as the princess he imagines? And if she does, will she ever be able to convince her father that, despite his objections over Seth being a commoner, there is nothing “common” about him at all?

Leap Into The Knight by M.J. Schiller
My rating: 4 of 5 stars

Leap Into the Knight by M.J. Schiller is a 2014 Kissmet publication. I was provided a copy of this book in exchange for an honest review.

When Darius, a great Knight and his novice, Orion, are commissioned to rescue a princess being held against her will and about to be forced into marriage to a horrible man, the last thing he expects is to find his entire career as a knight put to the test.

The Princess Megan- or Maggie to her friends, is beautiful and talented. Grateful for the intervention of the handsome and brave knight- Darius, and so happy to be back home, she finds Darius and Orion are fast becoming very important to her. It would seem she and Darius have a special bond that helps them in times of crisis, but alas, Darius is unable to fully commit to the beautiful princess due to his duty as a knight, and to complicate matters worse, the danger is not over for Maggie, and Darius is not the only one close to Maggie who is in love with her.

This novella length story is part of the Romantic Realms Collection- #3- and the first in the Romantic Knights Trilogy.

I really enjoyed this fantasy story with a strong, dutiful and loyal Knight who rescues a damsel in distress and in the process finds love. Although Maggie is indeed in need of rescue, she is no shrinking violet. She is strong, resourceful and the perfect partner for Darius. Naturally, things are rather complicated because Darius can not become involved with anyone to his status as a knight, and because there is a bit of unrequited love going on behind the scenes which is really sad, but I have a feeling it won' t be long before that situation works itself out for the best. This novel has action, drama, family alliances and secrets, sadness and danger and at least for Maggie and Darius, it looks like they will have their happy ever after despite all the obstacles in their way. I am looking forward to finding out what happens next for the characters in this book. This one is 4 stars 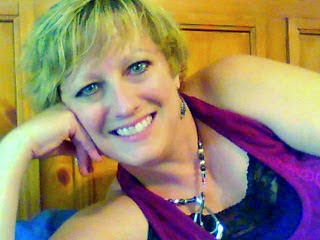 I was born in Overland Park, KS, grew up in St. Louis, MO, went to school at the University of Missouri-Columbia, and moved to Bloomington, IL fresh out of college.  I worked as a high school/junior college teacher, personnel recruiter, office manager of a jewelry store, and, for the past ten years, as a lunch lady.  I  like to karaoke and attend rock concerts.  I’m also actively involved at church and spend too much time on Facebook.  I am  the mother of a seventeen-year-old, fifteen-year-old triplets, and have been married to my husband, Don, for over twenty-four years.
I have been a writer all my life.  My first book, which was co-written with Mary Ellen Murphey in second grade, was titled The Black Cat, and was written on blue hotel stationary, hole-punched, and bound by white yarn.  I believe it is currently  out of circulation.
When I turned forty, I had an epiphany of sorts. I realized those bigwig publishing houses in New York were now probably run by people younger than me, so I shouldn’t be intimidated by them.  At about the same time, I was watching one of those award shows, and Jaclyn Smith got up to give a posthumous award to Aaron Spelling.  She credited him for encouraging her to go into acting, saying something brilliant like, “Reach for your dreams.”  Nothing new.  Almost even seems a little Jiminy Cricketish.  But, for some reason, it struck me that night.  When Aaron Spelling was thirteen, he was probably just like any other acned thirteen-year-old.  But he worked to achieve his dreams, and became a household name.  So, I  began to write.  Once I finished my first book,I wasn’t able to stop.  I would rather write than do just about anything else.  After all, I get to make people (characters) do what I want, and design their happy endings. What power!  And what a  privilege.