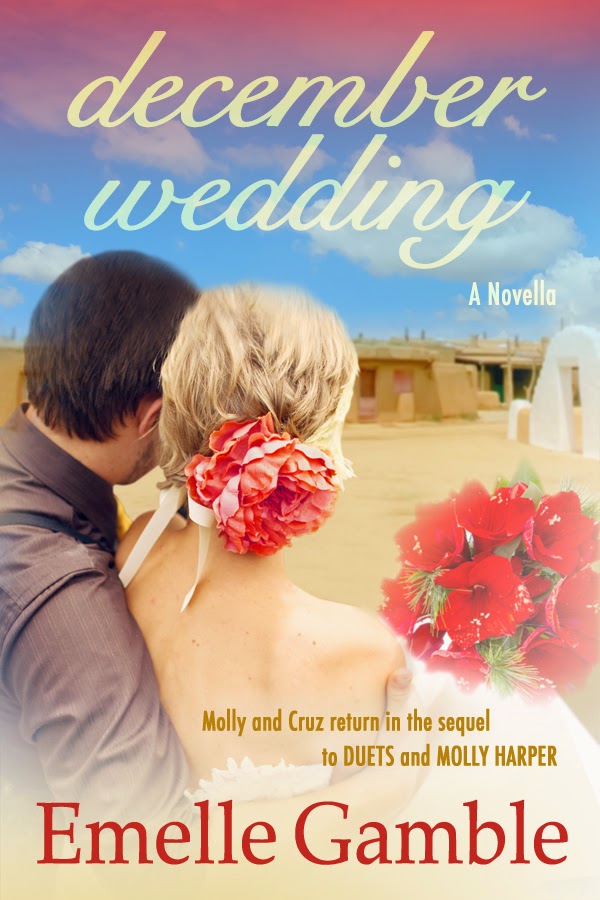 Molly Harper is a movie star who fans think ‘has it all’. Cruz Morales is Molly’s true love, and he hates the media intrusions into their life. Molly and Cruz are going to have a baby. And throw a secret wedding for her brother Harry. What could go wrong? Read DECEMBER WEDDING, the sequel to DUETS and MOLLY HARPER, and find out if there really is a happy ever after for Molly and Cruz.

Cruz stopped and looked to his right. In the side yard, at a small teak table where the gardener did the potting, a dark haired woman sat smiling at him. She was glossy and pretty, wearing an acid yellow dress. He recognized her from the TV.

The reporter. Diane something.

“Hi.” He walked over and extended his hand. “Call me Cruz.”

“I know. Have you finished with the interview?” He let his arms relax at his side, aware the woman was cataloguing everything about him. Dusty jeans. Old boots. Hair that needed cutting. Good thing she can’t see the titanium plate in my skull, he thought.

“Just about. The crew is doing some lighting work, but I’m done grilling your lady, until tomorrow. I’m sure you’re relieved to hear that.”

Cruz’s neck tightened at the woman’s use of ‘your lady’. “Very relieved.”

“I wanted to be the first to tell you that we made some news today. Molly acknowledged that you’re her baby daddy. She said she’ll confirm you are the father when we film the final interview,” Diane said. “I guess congratulations are in order.”

“She did?” All his defenses went up. Molly warned himt she might give the news to the press, but he wondered if the woman was trying to trick him.

“Scout’s honor.” Diane stood and crossed her heart quickly and then held-up her hand. “You already have a child, don’t you? Jesse, is it? Does he live with you and Molly?”

“I’m not answering questions about my son,” Cruz said.

“Oh, okay. Sorry.” She smiled brightly. “I just asked for background, to fill out the story in my mind. I know you never married Jesse’s mother…” she paused, “did you?”

“Oh come on, it’s public record. I could check.”

“Be my guest.” Cruz narrowed his eyes. “But keep my son out of your story.”

“Oh, of course. I already promised Molly I would. I’m a mother myself, and I understand how you both feel.”

Cruz crossed his arms across his massive chest. He knew his size and the scar that ran along the left side of his face were intimidating to people. Sometimes it bothered him.

Diane took a deep breath. “I am a little bit upset, however, that Molly won’t admit that the wedding she’s having here next weekend is yours. That would be such fun news for her fans to share!”

Cruz cracked the knuckles on his left hand and stared at the journalist. “We’re not getting married next weekend.”

“No?” Diane smiled provocatively. “Would you tell me if you were?”

“Well then, can you tell me who is getting married here? Bake Glory bakery swears they’re delivering a wedding cake next Friday. And Lana Del Ray’s people say she’s singing at a private engagement in Montecito during Thanksgiving weekend. So someone important is getting married around here.”

Diane laughed. “You’ve got that down, Cruz. Care to wager how many times you’ve had to say that since Molly divorced Ben Delmonico?”

“Too many.” His voice was harsh, too harsh, Molly would chide. The woman had flinched at his tone and volume.

Cruz cleared his throat, reminding himself that since he’d recovered from the accident, the anger he felt at the invasion of his privacy had to be controlled. He just had to slow his brain down, relax.

Molly could handle these jackals, but so could he. He just had to remember not to get emotional. “It was nice to meet you, Diane. Do a great job with your story. Molly worked very hard on her new movie, and she’s excited to be talking about it. I’d like you to remember, if you can, that she tires easily these days.”

“Of course I will. You love her very much, don’t you?” Diane took two small steps closer and crossed her arms over her chest. “It’s written all over you. I’m happy to see that, too. Molly suffered so much these past couple of years, thanks to that snake she was married to. She deserves to finally have a man like you.”

Cruz didn’t believe the woman cared at all about Molly. She was baiting him. He wasn’t going to bite and give her a quote about his feelings for Molly that she would cheapen by sharing with the world.

“Have a good day.” Cruz nodded and began to walk away.

“Cruz, is it by any chance Molly’s brother who is getting married next Friday?” Diane asked suddenly.

Cruz turned slowly and stared at her. “What brother?” It was the wrong thing to say, he realized too late.

“Molly said she was hosting a family event. But she doesn’t have much family, does she? So if it’s a wedding…”

Cruz blinked, but said nothing.

“When she said that, it didn’t make any sense to me. Because her only brother, Jason, is already married, right? Does Molly have another brother we don’t know about?” Diane’s green eyes glowed.

December Wedding by Emelle Gamble
My rating: 5 of 5 stars

December Wedding by Emelle Gamble is a 2014 publication. I was provided a copy of this book in exchange for an honest review.

As Molly's pregnancy advances, so does the pressure from Cruz to get married and from the media to give interviews and promote her movie. But, Molly knows Cruz, and she is terrified that he will not be able to handle the intense scrutiny he would have to live under being married to a movie star. As it is, Molly is having a very hard time keeping her biological family behind the scenes as one very persistent member of the press is trying every low, underhanded trick she can think of to gain access to Molly's personal life. Will Molly's career and the media prevent her and Cruz from having their happy ever after?

I have been impatiently waiting to see if Molly and Cruz would ever manage to get together for real and maintain a lasting relationship. It looks like they have some things in their favor but Molly is trying to protect Cruz from a life she is sure would smother him. In the meantime, Molly is working to forge a more solid relationship with her birth mother and her two brothers. But, once again the glare from the spotlight is threatening to ruin all Molly holds dear and she is powerless to prevent it.

First of all I would like to say what a pleasure and relief it is to read a contemporary romance by a seasoned author who made sure all the research was done, the i's were dotted and t's were crossed. This made the novel such a pleasure to read. Emelle has a real gift for writing mature, emotional stories that capture your mind and heart from start to finish and I have to say I have loved every minute of this series.

The portrayal of life in the public eye where there is nothing sacred, nothing private, nothing that can really be done to prevent it, and the powerlessness, the unfairness of being stripped of the basic human right of privacy is accurately depicted without being too in your face about it. This theme is a major pressure point for Cruz who is hot tempered and protective when it comes to Molly, leaning toward the alpha personality. (drool!) Being unable to respond to the baiting and below the belt tactics these people use, is a real test for Cruz. Molly's frustration is in the fact she wants to marry Cruz but he continuously reminds her of why that may never be possible.
But, finally, finally, finally!! Molly is able to release her fear and trust in Cruz and begin a new life with the proverbial “everything” we all wish and hope for... career, marriage, love, family, and children. What more can you ask for? Molly and Cruz deserve every ounce of their hard won happiness!!
5 stars! 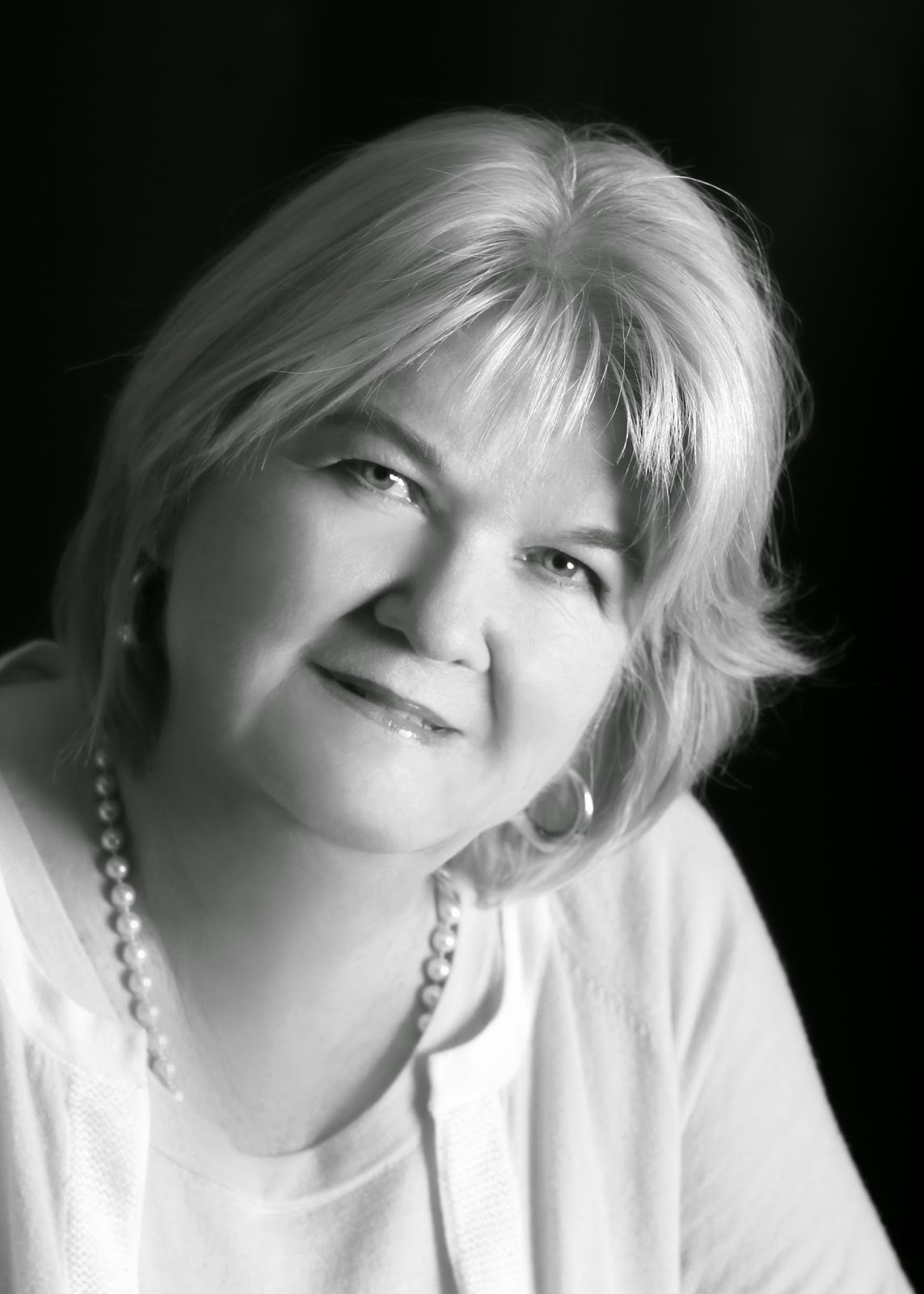 Always intrigued by the words ‘what if’, Gamble’s books feature an ordinary woman confronted with an extraordinary situation. Emelle celebrates the adventurous spirit of readers, and hopes each will enjoy the exciting and surprising journeys her characters take.