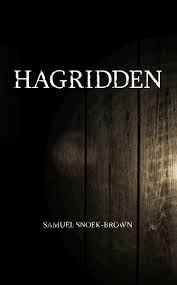 
As the Civil War winds violently down, fears of the South's uncertain future fuse with its unraveling traditions. Against the backdrop of this post-apocalyptic landscape, so littered with corpses and mythology and desperation, two women, stranded and alone in the Louisiana bayou, fight to survive.

Hagridden by Samuel Snoek-Brown
My rating: 3 of 5 stars

Hagridden by Samuel Snoek- Brown is a 2014 Columbus Press publication. I was provided a copy of this book in exchange for an honest review.

Without a doubt this one of the strangest novels I've read. Historical Fiction is the category this book is mentioned in the most, and technically it is. The setting is in the past, and it's fiction. So, it qualifies. But, this novel is unlike any other I've read in this category. Seeing the mostly glowing reviews on the book, I'm wondering if I have missed something here, but I have to say, it was not really my kind of book. Historical fiction is a favorite genre of mine, and being born in the state of Louisiana I found the synopsis intriguing. I had no preconceived notions going into the book, so I had no expectations one way or the other. I did find some things very curious. The women appeared to have not been named, while the men did have names. The old woman in the story tells tales of a rougarou which starts off a series of events in which a certain paranoia takes hold.
The woman and the girl are a mother-in-law and daughter-in-law all alone in the waning days of the Civil War. While they wait for the son/husband to return from war they work together to survive. They must resort to some pretty ghastly measures to stay alive, but one day a man arrives who was a friend with the husband/son and a kind of jealousy takes hold. The suspense increases as time goes by and the woman begins to really fear she is losing the girl to their neighbor.
A rougarou is a mythological creature akin to a werewolf. While there were plenty of real things to fear, it was the legend of the rougarou that had the trio on edge.
While I like to tell people when they suggest a story is on the dark side, I am a little dark and twisty myself. I can really enjoy dark fantasy, dark Gothic tales, and dark humor is really high on my list. However, there is a big difference between dark and depressing and for me I found the book didn't seem to have a single uplifting moment, not one little tiny ray of peace or redemption shone through, that I could pick up on It was a strange story, perhaps littered with some kind of symbolism or allegory I failed to pick up on. I'm not a total idiot, I did understand the irony, but I'm wondering if I really grasped what the author was going for here.
Despite the subject matter, the author does know how to weave a story. There is nothing wrong with his writing skills or his characterizations. It is quite obvious he put a lot of effort into this book and added visual details that were very impressive. Sadly, it was the story itself I had a difficult time enjoying so this makes rating the book a difficulty for me. I think 3 stars is where I'm going to land on this one. 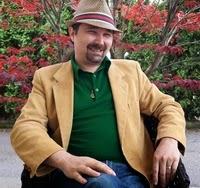 Samuel Snoek-Brown is the author of Hagridden, a Civil War novel from Columbus Press, and Box Cutters, a fiction chapbook from sunnyoutside press.

His short fiction has been published in Ampersand Review, Bartleby Snopes, Eunoia Review, Fiction Circus, Fried Chicken and Coffee, Prick of the Spindle, Red Fez, WhiskeyPaper, and others. He also works for Jersey Devil Press.

He is the recipient of a 2013 Oregon Literary Fellowship. He lives in Portland, Oregon, with his wife and their two cats, Ibsen and Brontë.