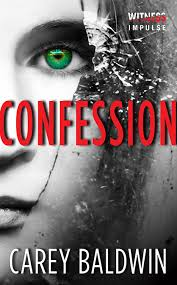 Confession by Carey Baldwin
My rating: 4 of 5 stars

Confession by Carey Baldwin is a 2014 Witness Impulse publication. I was provided a copy of this book by the publisher and Edelweiss in exchange for an honest review.

Faith's patient confesses he is the serial killer the police are searching for. It is her duty to report this to the police and Dante is arrested immediately.
Dante is the half brother of the wealthy and popular Luke Jericho. She had met Luke prior to his brother's arrest and the two had a connection, but it would have been unethical of her to pursue it. But, when Dante is arrested Luke insist on a meeting with Faith. Luke is positive his half brother did not commit these crimes. Luke has been trying to reconnet with Dante and bring him back into the family after Dante was sent away as boy due to an awkward family situation. Luke feels bad for resenting Dante all those years ago and wants to make ammends. So, Faith agrees to visit with Dante again to see if she can determine if the confession was authentic or not. In the mean time, Faith and Luke get better aquainted. They also begin to realize they are in danger from the "The Saint", whoever that may be. Is it Dante or is it someone else associated with Faith?
Confession is a very good psychological thriller/ romantic suspense novel. I was riveted by the half way point. The author does an incredible job of putting the reader through the ringer. There are many suspects and elements that lead the reader to wonder who they can or can not trust. There is a stunning shocker in the end of course, that you will not see coming. I think I accused every person in the novel except the neighbor kid at one point or another. The story is the main focus, although there is romance, it's not the primary part of the story. The most impressive thing for me was how the plot was pieced together. Little tidbits of information will have you thinking hard about certain characters and strange developments will really keep you guessing and trying to determine if you can figure it out. If you like very taut suspenseful thrillers you don't want to miss this one. Carey Baldwin is one to keep your eye on! Overall this is gets an A or 4.5 stars.