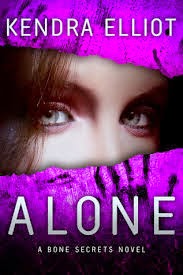 One rainy night in the woods outside of Portland, Dr. Victoria Peres is called to the site of a haunting crime scene. Six beautiful young girls—all in white dresses and arranged in a perfect circle—have been left for dead. Only one girl, fighting for her life at a nearby hospital, has survived the carnage. Things get stranger still when Victoria and the police discover that the disturbing arrangement of the bodies—as meticulous as it is mysterious—is straight from the pages of a decades-old cold case. Victoria is called on to do what she does best, read the bones of the dead for clues…while dealing with the surprise return of her first love, medical examiner Seth Rutledge. Only this time she must figure out how the two cases, fifty years apart, are connected.

Alone by Kendra Elliot
My rating: 4 of 5 stars

Alone by Kendra Elliot is a 2014 Montlake publication.

This is the first book I have read by this author, but it will not be the last. One part romantic suspense and one part dark mystery thriller, I was interested from the first page to the last. Victoria is a forensic anthropologist working an eerie case where a mass killing of young girls whose bodies are left out in the open Portland wilderness mimics a long ago cold case. Has the killer somehow returned or is this some twisted copycat?

With Victoria's boss retiring a new man has been hired to replace him. Victoria is stunned to see Seth, the love of her life and the man who so broke her heart she has never been able to move on to a stable relationships since. Will the two of them be able to work together to solve this perplexing case?

At first I did not like Seth. His reasons for leaving “Tori” all those years ago, just didn't add up no matter how you spin it. He thought he was doing the honorable thing but in reality more lives were wasted when a lesson in “two wrongs don't make a right” takes eighteen long years of Tori and Seth's life with each other away. It is possible now they could start over, if Tori is able to take another chance.

Victoria has more on her plate to death with than Seth coming back into her life. This murder case will become personal for Tori in ways she would never have imagined. In the meantime, the case continues to stump investigators and the cold case must be connected to this current case because someone has gone to a great deal of trouble to tamper with the evidence. Plus, a young girl who was friends with one of the victims becomes close to Tori as the two bond over the case and some similarities in their lives. But this girl could find herself a target . Will Tori and Seth be able to get to her before the killer does?

This is a very nice blend of romance and suspense. I was glad Seth and Tori were able to move forward and work to resolved their issues. This part of the story is wrapped up in time for the couple to get down to the nitty gritty of the case and work as a team, and they made a great team as it so happens. The story is layered with tension and suspense as a super twisted serial killer is revealed. A dark tale with a psychological tint to it that will keep you riveted. Don't read this one alone at night. 4 stars 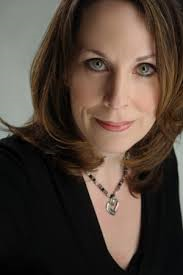 The CALLAHAN & McLANE novels are a spin-off of the Bone Secrets books. VANISHED, BRIDGED, and a third book coming summer of 2015.