MINE TO HAVE BY CYNTHIA EDEN RELEASE DAY BLITZ

“Mine To Have” By Cynthia Eden 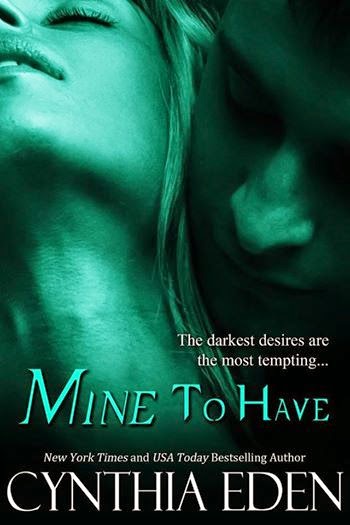 Mine To Have
(Mine Series, Book #5)
by Cynthia Eden

Is he a hero…or the villain?

When Elizabeth Ward sees Saxon Black rushing into the backroom of The Blade—a low end bar in Miami—she isn’t sure if he’s there to save the day…or just to raise some hell. But she’s being held hostage, and he’s her best hope of survival. Within minutes, she’s away from the jerks with the guns and riding fast and hard on the back of Saxon’s motorcycle.

Saxon has been working undercover for far too long. When he finds sexy Elizabeth—with a gun to her head—he knows he will do anything to keep her safe. But once he gets her away from her abductors, the threat to her isn’t over. Someone has put a price on Elizabeth’s head, and if Saxon can’t keep her safe from the danger stalking her, then she’ll be dead.

Their lives are both on the line.

As their enemies close in, Elizabeth and Saxon must go on the run. And the longer they are together, the hotter their attraction for one another seems to burn. Saxon vows not to let anyone hurt her, no matter what he has to do, because he’s falling fast for Elizabeth. He’ll stop the killers on her trail, and then he’ll have her. Forever.

“You can let go now.” His voice was the deepest, darkest rumble she’d ever heard, and it actually took a few seconds for his words to sink in.
When they did, she was horrified. Her hands flew away from him and she shot off that motorcycle. A bad move, really, because her thighs were still shaking from the ride, and Elizabeth hit the ground.
Smooth move.
She pushed up fast, though, and staggered to her feet. Elizabeth tossed away her helmet and ran.
Unfortunately, she didn’t get far.  A big, strong hand caught her shoulder and spun her around. In the next breath, her back was being pushed into the nearby brick wall, and Saxon had her hands pinned above her head. He held her easily, her wrists trapped in one of his hands.
“Didn’t we cover this?” he muttered, and his voice, if possible, had gone even deeper. “No screaming, no running—”
“No fighting,” she whispered back to him. “You said no…fighting. You never said I couldn’t run.”
He laughed then. A sound that was as deep as his voice and sent shivers racing over her body.
A man wasn’t supposed to laugh when a woman was terrified.  She knew nothing about the guy except for the fact that she’d seen him shoot two men and beat the crap out of at least two more.  And he’d said he…wanted her.
For an hour.
“Please, let me go.” Elizabeth wasn’t above begging, not then. She just wanted to survive that night. To get back to her apartment and pretend this whole terrible nightmare had never happened.  “I won’t go to the police, I promise. I won’t tell them anything about you.”
His head came closer to hers. She couldn’t discern much about him in that moment, it was too dark, but she’d seen plenty in that terrible little room.
Saxon. He’d been huge, filling that doorway. He had to be at least six foot three, and his shoulders had been so wide, his arms heavy with muscles.  He wore a faded t-shirt and loose jeans. He’d fought with a cold, vicious fury, and he hadn’t even broken a sweat when he’d taken down his enemies.
I thought Kurt was scary. He’s nothing compared to this guy.
“I don’t want to let you go.”
Those words terrified her.  No, he terrified her.  He leaned even closer. She could feel the light stir of his breath against her cheek. She had a flash of being tied in that chair and looking up—and into a pair of dark and deadly eyes.
And I asked him for help?  A desperate woman would do anything.  And she was desperate right then.

USA Today Best-selling author Cynthia Eden has written over twenty-five novels and novellas. She was named as a 2013 RITA® finalist for her paranormal romance, ANGEL IN CHAINS, and, in 2011, Cynthia Eden was a RITA finalist for her romantic suspense, DEADLY FEAR.
Cynthia is a southern girl who loves horror movies, chocolate, and happy endings.  She has always wanted to write (don’t most authors say that?), and particularly enjoys creating stories about monsters–vampires, werewolves, and even the real-life monsters that populate her romantic suspense stories.

You can find Cynthia at