JOHNNY CASH FAQ- All that's left to know about the man in black- by C. ERIC BANISTER 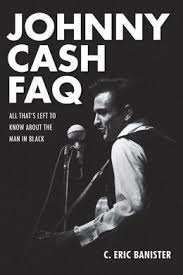 Johnny Cash FAQ: All That's Left to Know about the Man in Black by C Eric Banister
My rating: 5 of 5 stars

Johnny Cash FAQ by C Eric Banister is a 2014 Backbeat books publication. I was provided a copy of this book in exchange for an honest review by the publisher and Netgalley.

So, what else can we say about Johnny Cash? There was a movie about his life, many books have been written about “The Man in Black” and documentaries and so on. Well, to be honest, if there is one thing I have learned by reading these FAQ books released by Backbeat books, it's that these books dig deep and are for the hardcore, tried and true fans, the ones who have all the music, have seen all the shows and movies , and read all the books. However, if you are not a trivia master, this book is the best place to start if you want to know more about this artist. Once more let me stress this is not a dry biography. There are biographical chapters, but this book isn't laid out that way and does not follow a strict chronological order.
Naturally, we have to have some background on Johnny's life and the author goes through this briefly. The main focus is the on Johnny's musical career which had very humble beginnings. We learn who influenced Johnny and he had very broad taste in music.

“The Tennessee Three”, Johnny's first band, if you will, went through many changes and each member is given space in the book. Some folks stuck with Cash throughout most of his career in on capacity or other.

The Sun Record years gives a brief background of Sun Records and Sam Phillips which many are quite familiar with. More famously known for signing Elvis, Sun Records actually boasted a very successful group of musicians that also included Jerry Lee Lewis. Eventually, Cash and his group signed with Phillips and releases “Hey Porter”/ “Cry, Cry, Cry” and the group was given an advance of $3.30. ( Wow!)
Radio airplay followed as did live performances including a spot on the “ Grand Ole Opry”.

With a little success going for them, Cash asked about increase in revenue, but Sun records was a small independent studio and couldn't really afford. So, Cash, who has wanted to release a gospel album, something Phillips refused to do, signed on with Columbia Records. However, something that could only have happened back then occurred. Sun still had a back list of Johnny's music and would release those singles at the same time Columbia was releasing their music for Cash. The overkill didn't seem to have a positive, rather than negative effect. 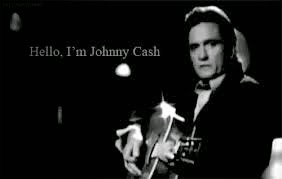 From the sixties onward, Johnny reinvented himself several times over. Many saw him as folk artist and many viewed him as a country artist. He went through phases and stages, a divorce, a remarriage, prison, drugs, recovery, movies, TV shows, and finally in the nineties he stepped out away from his normal collaborations and recorded “ Hurt” by Nine Inch Nails, an incredibly dark anti drug song. Toward the end of his life Johnny's main focus was on his gospel roots. 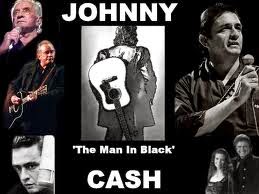 While the Phrase “ It's been a long, strange trip” will put most of you in mind of the Grateful Dead, this could aptly describe Johnny Cash's life and career. From rockabilly, to gospel, to folk, to country, to almost everything else in between, Cash covered it all, even a comedy and a children's album. His personal life was fraught with drama, a fight for his life battle with drugs and a stint in jail. He experienced huge heights of success and low periods when nothing seemed to work. But, few people had such a long career or reached such a legendary status. Cash was admired and respected by people from all categories of music, he inspired many artist and mentored others. He forged life long alliances with those behind the scenes as well as other artist. He took criticism on some of his political leanings, but was praised for his patriotism. His life and career was utterly fascinating and I think anyone will enjoy reading this book whether you are a die hard fan or not.
As always, this book was very well researched and organized. In my digital review copy, there are color photos of album covers, some of which are rare. I do not know if the kindle or nook versions will have the same lay out or if the print version will differ. But, this book was very nicely presented and I truly enjoyed it. 5 stars.