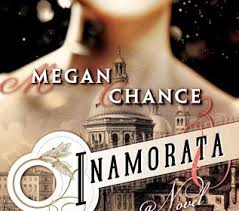 Inamorata by Megan Chance
My rating: 4 of 5 stars

Inamorata by Megan Chance is a 2014 Lake Union Publishing release.

A succubus is a female demon or supernatural entity in folklore (traced back to medieval legend) that appears in dreams and takes the form of a woman in order to seduce men, usually through sexual activity. The male counterpart is the incubus. Religious traditions hold that repeated sexual activity with a succubus may result in the deterioration of health or even death.

I chose this book as part of the kindle first reads program. It was vague on the genre classifications so if you see the historical fiction category listed, be aware this is a paranormal fantasy set in a historical era in time and set in Italy. Purist of historical fiction could get the wrong idea based on Amazon's listings.
So, now that I've cleared that up...
Sophie and Joseph are twins bonded very strongly together, all alone in the world with a small inheritance which is dangerously running low. Joseph is a talented artist but for the fame he so longs for he needs a sponsor. He and Sophie work on those with deep pockets by having Sophie flirt and seduce the men who could help Joseph achieve notoriety. After a horrible scandal in New York the siblings travel to enchanting Venice and insert themselves among the bohemian types and immediately meet a man named Nicholas Dane.

Nicholas was once an aspiring poet but an all consuming relationship with a woman calling herself Odile Leon, he lost all his talent. He soon realizes Odile has done this to many men over hundreds of years. A muse in the beginning, but she soon drains the men of their talent. She even admits to being the muse of John Keats and inspired the poem “Lamia”.

"Lamia" is a narrative poem written by English poet John Keats in 1820.[1]
The poem was written in 1819, and comes within Keats' most brilliant period - it was written soon after "La belle dame sans merci" and his odes on Melancholy, on Indolence, to a Grecian Urn and to a Nightingale and just before "Ode to Autumn". The poem tells how the god Hermes hears of a nymph who is more beautiful than all. Hermes, searching for the nymph, instead comes across a Lamia, trapped in the form of a serpent. She reveals the previously invisible nymph to him and in return he restores her human form. She goes to seek a youth of Corinth, Lycius, while Hermes and his nymph depart together into the woods. The relationship between Lycius and Lamia, however, is destroyed when the sage Apollonius reveals Lamia's true identity at their wedding feast, whereupon she seemingly disappears and Lycius dies of grief.
Nicholas is consumed with anger and bitterness and becomes obsessed with finding Odile once again and preventing her from feeding , killing and draining others of their talent. So, it is he finds himself involved with Joseph and Sophie in Venice. However, he could never imagine the fate that awaited him.

I must admit the book got off to a very slow start for me. It was not until the half way mark I began to really piece together where we were going and the suspense began to build. I have not read a book quite like this one. The Venice backdrop is so romantic which makes a stark contrast to the evil that Odile represents. The all consuming desire for fame and recognition will cause many to make a misstep, making the proverbial deal with the devil to achieve their goal. In this case Odile has gotten to the point of desperation as Nicholas has made good on his promise to keep her in check. But when Nicholas and Sophie began to fall in love, Nicholas loses his focus leaving the door wide open for Odile to do her worst and of course Joseph is the one she wants above all others- THE one she has waited for. However, Joseph is not like all the others. There is a strength he has that prevents him from truly bonding with the succubus- his bond with Sophie. Now, some might not like this bond so well as it has an implied unnaturalness to it. The siblings grew up in an abusive situation and have leaned on each other heavily making their relationship stronger than is normal. This could be very off putting to some readers.

True love which triumphs over evil, love that makes the ultimate sacrifice makes this story special. A tip of the hat to the author for weaving such a deep story which really did remind me of Anne Rice's vampire saga, just because of the style of writing and the type of historical backdrop that gave the story a lushness and made it very atmospheric. However, it may have been too ambitions of an undertaking. It was absorbing once the story really to moving and is certainly outside the box! I would recommend this novel to those who like a dark fantasy with paranormal elements in a historical setting. 3.5 rounded to 4