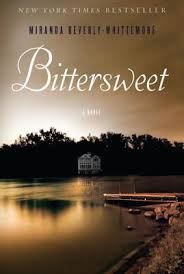 Bittersweet by Miranda Beverly-Whittemore
My rating: 4 of 5 stars

Bittersweet by Miranda Beverly-Wittemore is 2014 Crown publishing release. I was provided a copy of this book by the publisher, Edelweiss, and Blogging for Books- in exchange for an honest review.

I could envision this idealistic estate set in Vermont during the summer months, could see the cottages, and could understand Mabel's attraction to the Winslow family. The roommate of Ev, a girl that seems to only need Mabel when it suits her, gives Mabel the opportunity of a lifetime when she is invited to spend the summer with her. Bittersweet is the name of the cottage Ev will inherit and she enlist Mabel to help her get the place in shape.
Told in first person narrative, the Winslow family has Mabel enthralled and she will do anything in order to remain on the estate. But, when one of the relatives living on the estate ask Mabel to look into the family history, hinting at something that might prove the family came by it's wealth by being involved in something shady or criminal, Mabel is intrigued. Of course she must keep her research a secret from the rest of the family.

As Mabel learns the lay of the land, so to speak, she encounters the adopted daughter, Lu, and Ev's brother, Galway and assorted other rather eccentric relatives, all with their own cottage.
But, the Winslow family are not the only ones with a deep dark secret. Mabel herself has a few things she would prefer the Winslow family not to know about her and her family. 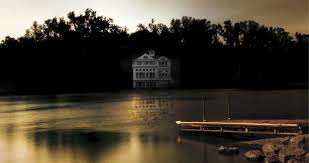 This book has been categorized as literary fiction, mystery, and even a few labeling it “Gothic”. I think this book would indeed fit into all these genres. The first person telling, which in my opinion is the hardest to pull off, was done very well, the suspense is an excruciatingly slow build, which left me with a constant sense of foreboding, and the mystery is compelling, and Gothic? Well, not the Jane Eyre type of Gothic and this book does not have any supernatural elements which many think is what Gothic is all about, but more of a V.C. Andrews style of Gothic. It's a strange combination, but overall it worked. Now, if you are one of those people that absolutely must have your characters likeable, you might want to move on, because while I could identify with Mabel on many occasions, she has her own flaws. Is she really any better than the Winslow's? If you love old family secrets with lots of twist and turns, then you will like this one. This book most likely hit close to the mark with families like the Winslow's who may have a rather sordid history but know how to put a positive spin on it with the public. It happens all the time I am sure. I found this book very absorbing and atmospheric. The weather patterns even added to the drama with wind and storms during the summer months hinting at a type of turbulence that mirrored what was happening with the Winslow family and with Mabel.
This would make a good book club read and I recommend to those that enjoy all genre's I listed above and those that like to read something a bit off the beaten path. This one is 4 stars. 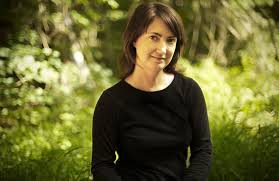 ***I love to meet with book clubs, either in person in the New York area, or via phone or Skype. Please email me: mirandabeverlywhittemore@gmail.com***

I write novels. My third, Bittersweet (Crown Publishing, May 2014), is set at the home on Lake Champlain where I spent my summers as a little girl. But that’s where the resemblance to life ends—the place, renamed Winloch in the book—is inhabited by a family of bad people. I wrote Bittersweet for people like me, who love The Secret History and The Emperor’s Children; it’s a literary beach read.

Based in some part on my own experience being photographed by two fine arts photographers, Jock Sturges and Mona Kuhn, I started my first novel, The Effects of Light, to answer the question most Americans seemed to ask when I explained this photographic work to them—would I still love it if an innocent died because that work had been made? My second novel, Set Me Free, was based in part on the time I spent on the Crow reservation in high school, the legacy of my countercultural parents, and the complications of their generation of liberal do-gooders. The book was also an homage to my theater school-aged days and based on The Tempest.

Check out more about me and my work at MirandaBW.com and Twitter: @MirandaBW. Also, check out my web project about girlhood friendship: FriendStories.com.