QUEEN FOR A NIGHT BY JENNIFER BLAKE - REVIEW 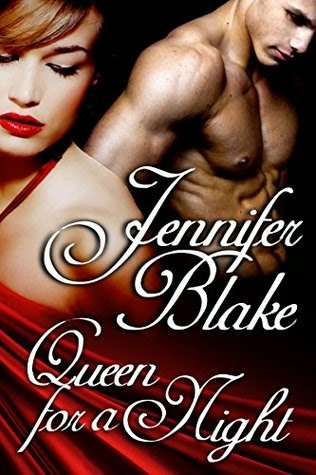 Queen For A Night by Jennifer Blake
My rating: 4 of 5 stars

Queen for a Night by Jennifer Blake is a 2014 Steel Magnolia Publication.

Mardi Gras! What a party, right? For some the idea of being the Queen of the Mardi Gras ball would be dream come true. For Caroline, a dream was all it would ever be. But, when her Uncle Tony suffers a heart attack it looks like it will be Caroline who will reign as Queen. Sounds like Caroline hit the jackpot. But, there's a hitch... her uncle chooses who the King will be and he decides it should be Ross McDougall. Well, that could be a big hurdle for Caroline to jump over. Ross will be a hard nut to crack.
When Caroline boards Ross's yacht for what should have been a short easy trip, things go awry when they are caught out in a storm.

The south, and especially New Orleans can feel like an entirely different country to some people. Mardi Gras is a HUGE deal and being the queen of the ball is a coveted honor. But, before all is said and done Caroline may feel like it's more trouble than it was worth. Old resentments will put Caroline in the line of fire between Ross and another woman who is hell bent on revenge. What Caroline didn't count on was her reaction to Ross McDougall who apparently has been carrying a torch for her.
But, with petty jealousy and manipulations going on behind their backs, Caroline's fairytale night could end up being the worst night of her life.
Ross and Caroline had previous relationships that left them with scars in one way or another. Can they put the past behind them and overcome the machinations of a shallow and vindictive woman to find love?

This short contemporary romance with the excitement of Mardi Gras as the backdrop focuses on the fear of taking a change on love after being hurt. The way the couple were tossed together and the end result will leave you satisfied knowing who really got the last laugh. The is an enjoyable read, a bit too rushed and I felt the story could have been a little meatier, giving us a little background on Uncle Tony and his motives, but novellas give us a “ get right to the point” story and sometimes that is just what I am in the mood for . This one is a 3.5 rounded to four.