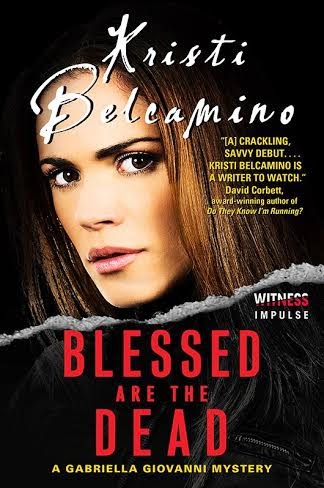 For her debut novel, BLESSED ARE THE DEAD (Witness, on sale 6/10/2014, $2.99, ISBN 13: 9780062338907), Kristi Belcamino relies on her knowledge gained from working as a crime reporter at newspapers in California, specifically in her experience with a serial killer who police and FBI agents liked to several kidnappings and murders. Belcamino’s personal past colors this smart, thrilling novel with a unique new voice.
BLESSED ARE THE DEAD offers chilling, authentic glimpses into the mind of a psychopath while also mining the psyche of an extremely likeable protagonist.  The novel sets up a new series featuring Gabriella Giovanni, an Italian-American Bay Area crime reporter.  BLESSED ARE THE MEEK, the second book in the series will be published in July.
EXCERPT:

BLESSED ARE THE DEAD pits Italian-American Bay Area Crime reporter against a serial killer who preys on children. When they were little girls, Gabriella Giovanni’s sister was kidnapped and killed. Twenty years later, Gabriella spends her days on the crime beat flitting in and out of other people’s nightmares and then walking away unscathed. That changes when a little girl disappears and Gabriella’s quest for justice and a front-page story leads her to a convicted kidnapper who reels her in with tales of his exploits as a longtime serial killer and promises to reveal his secrets to her alone. Meanwhile, Gabriella’s passion for her job quickly spirals into obsession when she begins to suspect the kidnapper also killed her sister. Gabriella won’t hesitate to risk her life to garner justice for the dead.

Blessed are the Dead: A Gabriella Giovanni Mystery by Kristi Belcamino
My rating: 5 of 5 stars

Blessed Are the Dead by Kristi Belcamino is a 2014 Witness Impulse Publication. I was provided a copy of this book in exchange for an honest review by the publisher and Edelweiss.


Gabriella Maria-Grazia takes her job very seriously. She is a crime reporter for a Bay Area newspaper. She has news in her blood. She lives it, breaths it. She is currently coping with yet another break up and an ambitious newbie who isn't beneath trying to a few underhanded tricks to make Gabriella look bad in front her bosses.

But, when a missing persons case involving a young girl is making headlines, Gabriella takes it personally. She has lost a sister at a young age and this case is hitting her hard. Everything else is on a back burner while she joins in the search to find the missing girl.

Told in first person, this taut suspense thriller follows Gabriella as she follows a creepy serial killer down a dark, twisty road in hopes of finding out what happened to a missing girl, but also in hopes of finding out about her own sister whose killer was never brought to justice. As the suspect, Jack Dean Johnson, plays games with Gabriella she will remind you a great deal of Clarice Starling. Gabriella is spellbound by the suspect as she finds herself feeling some kind of empathy for the trauma he suffered in childhood, and he dangles information in front her making her think he knows something about her sister. But,is he the real killer? Oh, yes , he's killed before, many times. But, is he the one that kidnapped the most recent victim and does he really know anything about what happened to Gabriella's sister? Or is he just toying with her?

Also, on the case is a veteran detective, named Donovan who has a bad reputation, but who also finds himself drawn to Gabriella and she to him. However, the relationship appears doomed from the start as their respective careers clash.
The atmosphere is dark and gritty, and this crime thriller is not for the faint of heart. It is always tense when a child is involved in a crime and this book is not only riveting but heart wrenching as Gabriella begins to remember the sadness and grief she and her family suffered when her sister died. Plagued by vivid and horrendous flashbacks of her sister's funeral and her own sense of helplessness and guilt, this case has Gabriella throwing caution to the wind and stepping out into some really dangerous territory. I liked Gabriella from the start to the finish. She was often hard on herself and took blame when she shouldn't have, but she is very easy to understand despite keeping herself closed off to people. Donovan is also a dark and mysterious character that I didn't quite know how to take. Was he using Gabriella? Was he a rogue cop? I just couldn't get a good read on him.
The secondary characters fleshing out the story with Gabriella finding out just who her real friends were and a big dose of karma will see Gabriella coming out a winner in the end. There are lingering questions about some things, but since this is a series I think we will probably get the answers to some of these questions sooner or later. In the meantime, I have found a new mystery/ thriller author to add to my “Must Read” list.
If you like dark suspense thrillers be sure to check this one out. Five stars! 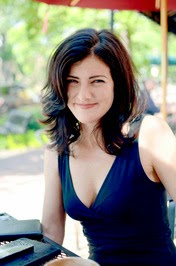 Kristi Belcamino is a writer, photographer, and Italian mama who also bakes a tasty biscotti.

As an award-winning reporter in California, she flew over Big Sur in an FA-18 jet with the Blue Angels, raced a Dodge Viper at Laguna Seca and watched autopsies. Her first novel, BLESSED ARE THE DEAD, was inspired by her dealings on the crime beat with a serial killer.

"Kristi Belcamino uses her newsroom background to grand effect in this crackling, savvy debut. Insider know-how and deft detail make every page come alive -- and those pages fly by as the story reaches out and grabs you by the heart. Blessed are the Dead is a great read, Gabriella Giovanni is a one-of-a-kind character, and Kristi Belcamino is a writer to watch." --David Corbett, award-winning author of DO THEY KNOW I'M RUNNING?

"A fast-paced and remarkably assured debut, featuring an immensely likeable protagonist and a reporter's eye for detail. Belcamino puts her experience on the crime beat to good use, creating the kind of villain who'll lurk in your nightmares long after the book ends. Double-check your locks before you crack this one open!"
-- Owen Laukkanen, author of THE PROFESSIONALS