TOO DEEP FOR TEARS BY KATHRYN LYNN DAVIS 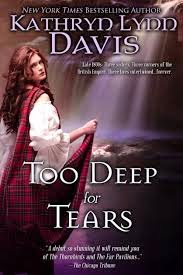 TOO DEEP FOR TEARS by Kathryn Lynn Davis
My rating: 5 of 5 stars

Too Deep For Tears by Kathryn Lynn Davis is a 2014 digital release. This book was published originally in 1989 and is the first book in the Victorian Trilogy.
I was provided a copy of this book in exchange for an honest review.

Wow! I really, really, really, wish they wrote books like this today. Yes, this is a tome, a nearly 700 page saga that will carry us from the Scottish Highlands, to England to China to India and back again.

The book is broken down into 4 parts .
Part 1

This first part gives usAilsa's story. Growing up in the Scottish Highlands, raised by her mother, Ailsa is nearly obsessed with uniting with her father, Charles Kittridge. She never knew her father and has lived with her mother's decision to stay in Scotland while Charles follows his wanderlust and experiences grand adventures. In order to hopefully meet her father and have some kind of relationship with him, she marries an Englishman named William despite the fact she has always loved Ian. The call of far out lands and adventures and the chance to meet Charles pulls Ailsa away from her beloved highlands.
England proves to be a difficult adjustment. William's family is formal and the rules of society are far more complicated than in Scotland. William himself his far from the passionate lover Ailsa craves. His family is aghast at Ailsa's ways. Soon, Ailsa will become depressed as her husband is obviously spineless and she begins to miss her home in earnest.
Was the marriage a mistake? Will she and William live in a cold uncomfortable and stilted world together or will they learn to understand each other in a way they never thought they could?

Charles has been separated from his wife for some years now, but still holds her in his heart. However, he succumbs to the seductions of a beautiful Chinese woman and together they have a daughter- Li-an.
Li-an is raised in the traditions of China and her mother is very adamant about Li-an's future and who she will marry. So far, no one has impressed her mother enough to agree to a marriage. With her father having moved on with his life of adventure Li-an is trapped by Chinese customs, but has a rebellious streak non the less. She has also harbored bitterness towards her white British father for skipping out on them when times got hard.
When Li-an meets Chao he is a man that appeals to her rebellious nature . Chao holds all things considered “traditions” in disdain, but Li-an has her heart set on a marriage to him even though her mother is disapproving. However, Chao has principles and honor that could be his undoing. Then old rumors re-emerge regarding Li-an's mother and the possibility she could have certain objects others want. This will put Li-an in the direct line of fire. So, at just the right moment Li-an read the letter asking her to travel to the highlands to meet with her father who is in ill health. Will she be able to leave China and make peace with Charles?

Part 3
Calcutta, India 1859
Charles and Emily conceive Genevra despite Emily being married to someone else. Once the truth is discovered Charles is long gone and Emily is cast out by her husband. Genevra is raised by her aunt and uncle but is basically an outcast. She meets Alex who is British and they fall in love. But, Genevra has a hard time with British people because they have been so mean to her. As a result she too harbors deep resentfulness toward her father. When some misunderstandings are finally cleared up and the way seems clear for Genevra and Alex, Genevra is informed of her father's summons. She does decide to go with the promise of Alex waiting for her return.

Now comes the moment of truth for Charles. He is dying and wishes to be in Scotland with the woman that he loved first and loved the most. He also wants to make peace with his daughters and his own regrets. For Ailsa it is hard, but she is home, really home and she is the oldest of the daughters and has children of her own. So, while she is distressed to learn she has sisters, she is also excited to meet them. She has brought one of her daughters along and she is falling love with Scotland. For Li-an and Genevra making peace with Charles is not as easy. Have your tissues handy as these strong women who have lived through so much pain because of one man's inability to settle down and think of someone other than his own self and his own desires, will find it within their hearts to see the good in him, to forgive him for his mistakes and will find an inner peace within themselves and a new bond with one another that will be everlasting.

This is what we could term a “sweeping saga” which spans many years. I loved reading about each of the daughters and the effects of growing up in an age when being illegitimate or born as a result of an affair or growing up without a man in the home was just unheard of. Each culture, from Scotland to China to India had it's own special history and cultures and traditions. There were good and bad people, heartache, disappointments, danger, and true love. This was an incredible journey and written in lush detail. Wonderful descriptions of the countries featured, very detailed and captured the imagination. Like I said before, books like this are seldom ever written anymore. I do miss this type of writing and these very emotional stories that depict women from the past that have to live within the strictures and prejudices of the time period or culture they are born into, but find a way to achieve inner strength and resolve. There are no sermons, no political statements, the language is accurate to the historical period, nothing is sugar coated or watered down nor was history rewritten in order to stay politically correct, and the story didn't have an unrealistic quality or tone. Life was hard and these women suffered the consequences of the actions their parents took. This has a direct impact on the women they will become.
I did have a thought while reading the book concerning the adamant refusal by some to leave the country they loved or at least a fear of leaving the only place they knew and understood, while it was considered odd to wish to see more of the world like Ailsa did. These days travel is never given a second thought and while we may experience contentment in a certain state, city, or country, we think nothing of picking up and traveling far away from home to vacation, attend school, or relocate. I wonder now if we have lost that strong bond to a particular place that some of these characters seem to have. Very interesting how things have evolved. I also wonder if I am the only one that really wasn't all that impressed with Charles and his wanderlust. To me, although his actions were explained, I still felt like he lived for his own pleasure and once he had moved on from a relationship, he was pretty much out of touch forever, especially with the two younger daughters. I was happy that in the end he did call all the ladies together in order to make peace with them. This was the one thing he did without a purely selfish motive. I am also happy that the ladies had the grace and dignity to open up to him even if it was very difficult to forgive him. So, there were several thought provoking themes throughout. This book is now in digital format and is easily obtained in online bookstores. If you like historical fiction and romance you should treat yourself to this one.! This one gets 5 stars 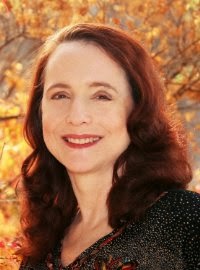 Kathryn Lynn Davis is the New York Times bestselling author of several books including Too Deep for Tears, All We Hold Dear, and Somewhere Lies the Moon, all available from Pocket Books.
Posted by gpangel at 12:00 AM