THE CITY BY DEAN KOONTZ - A REVIEW 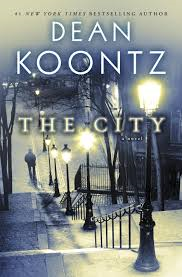 The City: A Novel by Dean Koontz
My rating: 3 of 5 stars

The City by Dean Koontz is a 2014 Random House publication. I was provided a copy of this book by the publisher and Netgalley in exchange for an honest review.

Once upon a time, Dean Koontz was a go to author for me. Over the years however, it became a crap shoot. Sometimes he was just brilliant and sometimes well....

The City gets off to a really slow start. I like the time period which was in the late 1960's. I also liked the first person narrative. But, by a quarter of the way in I was starting to wonder where all this was going, or if it was going anywhere at all.

Jonah is a young black boy with aspirations to become a piano man and thrive in music the way his grandfather and mother do. His life is confusing at times. His father is in and out of life, mostly out. His mother is a lounge singer at night and works at Woolworth during the day. When he was still quite young he was visited by a woman named Pearl who described herself to him as being the soul or spirit of the city. Jonah is the only one aware of her it seems and she tells him things through dreams . Jonah becomes aware of a criminal plot and is warned about a woman in his dreams. When this woman shows up in his life for real, Jonah knows that trouble is coming.
As his mother is always at work, Jonah befriends a formal Japanese tenant in his apartment building. The two of them work on uncovering the sinister plot although they have scant details. One thing is for certain, the woman Jonah knows as Fiona has a feeling about him and is always sending him veiled threats so he knows she is keeping tabs on him.
However, the worst case scenario takes place and Jonah's life is changed forever. With his dream in jeopardy the ever optimistic Jonah decides to embark on a different type of musical career. From this point on , although the reader will suffer through an emotional punch to the gut, the story seems to take a different tone as Jonah learns to cope with life with a new perspective.

Ultimately this story like so many others Koontz has penned has an uplifting quality to it and turns out to be a sweet story. All the people that Jonah helped just by being the person he is will step up and pay if forward. Jonah will not abuse the gesture and will become an inspiration to many.

While it took me well over half way into the book before I was really engaged in the story, the last 40% really made it work the effort. It's not a bad story, but there just wasn't enough information about “Pearl” and the story did just drag on with seemingly no direction for so long I seriously thought about putting it down and going on to something else for awhile. So, yes, Dean Koontz can certainly write better than this, and has much more substantial material out there, but this book could appeal to those who don't really like “horror” novels or overly graphic violent stories. Yes, it is a paranormal tale, but not in the usual way. It's really a coming of age story with a supernatural tone. Although not my favorite by any means it ended up being an enjoyable read so I'm going to give this one 3 stars.