MY NAME IS TAMSIN BY J R SMITH- A BOOK REVIEW 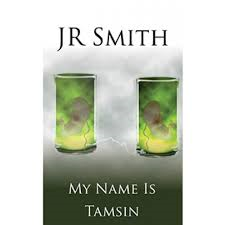 My Name is Tasmin by JR Smith is a 2014 Penrose pub release. I was provided a copy of this book in exchange for an honest review.
This is a thought provoking novel that is very fast paced , has suspense, romance and some very emotional aspects as well.

Thomas and Tamsin were found abandoned, placed in homes and loved very much. However, they both have an illness that has doctors baffled. The families of these special children are drawn together because as far as anyone can tell these two children are the only ones suffering from this strange malady. .
This is not the most ideal way to meet someone but Alex and Amber begin to bond over their love for Thomas and Tamsin respectively. However, they don't have long to explore any feelings between them when they discover they are being watched and followed. But why?

In the first part of the book we are clued in on where the children come from and why they have become the object of so much interest.
The second part of the book deals with their time on the run. There is a lot of emotional twist and turns and serious suspense as well as jaw dropping revelations.
Part three is about the price that must be paid. Freedom came at a cost, but things will be much better in the future.... we hope.

This is a very absorbing read. I don't think it's a spoiler if I say there have been some experiments performed that a group of very evil people are counting on to take control of everything. Although we guessed this from the beginning there were subtle hints along the way that some really whopping reveals were coming. So, buckle up for a thrill ride.
Now a good book has many elements and this one managed to pull off a really great human story and even gives us a romance. The underlying moral of the story is about family, no matter how diverse we are family is the most important thing we can have. Humans are capable of great evil, but are also capable of great love and compassion. So, although this book has a science fiction element , I think the story will appeal to mainstream readers and romance readers as well. Well done. 4.5 rounded to 5.