MIST ON THE MEADOW BY KARLA BRANDENBURG- A BOOK REVIEW 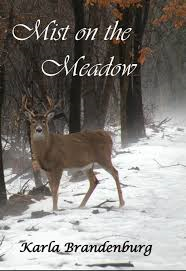 Mist on the Meadow by Karla Brandenburg
My rating: 4 of 5 stars

Mist in the Meadow by Karla Brandenburg is a 2013 independent publication. I was provided a copy of this book in exchange for an honest review.

Marissa, a pastry chef, is celebrating her twenty- fifth birthday when she discovers with a little help from her uncle Bart , that she has inherited psychic powers. Uncle Bart arranges for Marissa to adopt a very special cat named “Hex”.
Hex had once belonged to Wolf's grandmother, and since Wolf is the legal executor of his family's company, Harper Electronics, he freely allows Bart to take the cat. In the meantime Wolf has been told that to unlock a certain codicil in his grandmother's will he will have to find a “Kundigerin”. He has no idea what that is or how to find one.
But, all the time there is a “Kundigerin” right under his nose- Marissa. Marissa's German heritage is behind the “gift “ she has now inherited as well as having been born with a mass of red hair.


Wolf learns that Harper's is in bad shape financially. He is dealing with the board and his grandfather's bad bookkeeping when it becomes apparent Marissa knows a great deal about his family. Immediately suspicious of how she knows all the things she does, Wolf doesn't trust her. But before long he and Marissa are tearing at each others clothes.

However, Marissa and Wolf seem to be the victims of someone's wrath and a mystery develops, one in which Marissa's new gift could be very helpful, but could also put her in serious danger.

This paranormal fantasy is rich in imagination and told a very interesting story of Wolf and Marissa's family history. Wolf and Marissa are pretty much glued to one another on impact despite Wolf's initial confusion about Marissa's abilities. A question involving the accident that killed Wolf's parents is at the heart of the story. The paranormal elements were outside the box and mixed German mythology with folklore and helped to answer questions and resolve long buried secrets. The romance was sensual, not overly angst filled, but Wolf and Marissa do have a lot to deal with and go through their fair share of misunderstandings and hard times.
There were a few contradictions and a few areas that could have been more explanatory. Marissa was to keep her new gift a secret, but she was rather open about it, and the German words were not defined for the reader. If things like that bother you, you can always go to the internet and look for translations, but I don't think the reader should have to work that hard. A brief explanation as what these words meant would have helped the reader understand the complexities a little better.
Other than those small complaints this is a quick and enjoyable read and crossed genres into romance, mystery, and fantasy. This is an excellent book to lose yourself in for awhile. I'm giving this one a 3.5 rounded up to four.