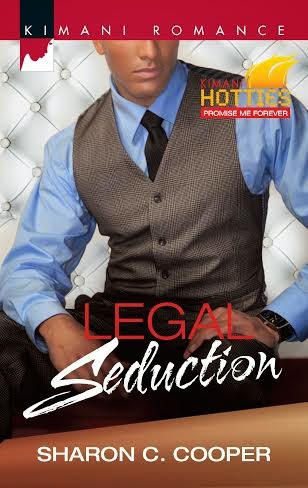 When it comes to desire, they’re both pleading guilty
In the courtroom, criminal defense attorney Iris Sinclair is cool and confident. Yet around her new client’s guardian, she loses all composure. Atlanta club owner Nash Dupree is an infamous playboy who could compromise Iris’s heart as well as her case. For once, she feels like a curvy goddess instead of a straitlaced lawyer—even if the evidence suggests what he’s looking for is strictly short-term.
No matter what the tabloids claim, Nash has made his teenage niece his first priority, and without Iris’s help he’ll lose guardianship. What began as seduction, a sweet thrill, has turned into something more—now he wants Iris forever. But proving his intentions means winning her trust before his reputation drives away the only woman who has ever captivated him, body and soul….
RT Book Reviews (Romantic Times Magazine) has chosen LEGAL SEDUCTION as one of their “Top Picks” for June 2014 – 4.5 stars!

Excerpt :
Nash dribbled the ball. “Do you play?” he asked, holding up the basketball.
“I used to.”
“How about a little one-on-one?” He shot the ball from the three-point line and made it. He then followed that with an easy layup.
Iris had played basketball in high school and received an athletic scholarship to attend Spelman College, but hadn’t played ball much since then. She knew she could hold her own against Nash, but basketball was a contact sport, and too much of that with him probably wouldn’t be a good idea. As it was, she could barely breathe whenever he was close, and the way he made a simple touch feel like a sensual caress sent brazen thoughts straight to her brain.
“So, what do you say?” Nash continued shooting around, making one basket after another.
“About what?”
“About playing. How about a game?”
“I don’t know, Nash. You clearly play often and I don’t want to embarrass myself.”
“I play, but not often. I’m sure you’ll do fine. Besides, it’s just me and we’ll just be playing around for fun.”
She pulled her bottom lip between her teeth and thought about it for a few seconds. “Oh, what the heck, why not?”
Iris sat her bag on the bottom bleacher. She removed her sweater and tossed it next to the bag, leaving her with a white T-shirt and jeans on.
Nash threw her the ball. “Let’s play to eleven, counting by ones.” He tugged his shirt out of his pants and lifted it over his head.
Iris was sure her heart stopped at that moment. She breathed in, trying to get oxygen to her lungs, but it wasn’t working. Her head spun at the sight of his smooth, chiseled chest sprinkled with a light sheen of perspiration, his muscles contracting with every move. She tried not to stare, but she couldn’t help it. His well-defined pecs were perfectly sculpted. She had always assumed he had an amazing body, but his flawless physique was way beyond her imagination.
“Uh, you can’t play like that,” she stuttered and the basketball slipped out of her hands and rolled a few feet away. She licked her lips and swallowed hard when Nash turned and faced her, giving her a better view of his enticing body.
“Play like what?” He frowned.
“Like…” She gestured at his body with a wave. “Like that. Put your shirt back on.”
As realization of the problem dawned on Nash, he grinned and moved closer to Iris. Her heartbeat pounded in her ear and her stomach dropped when he made his pecs dance.
“Does my being half-naked bother you?”
Hell, yeah, it bothers me, she thought, but said nothing. She only continued to stare at the smoothness of his skin, appreciating how his broad shoulders tapered down to flat abs and a narrow waist.
“You know―” Nash yanked on one of her belt loops and pulled her closer, his mouth so close she could smell his fresh breath “―you could take off your shirt, too, if you feel that you’re at a disadvantage. I won’t mind.”
Copyright © 2014 by Sharon C. Cooper 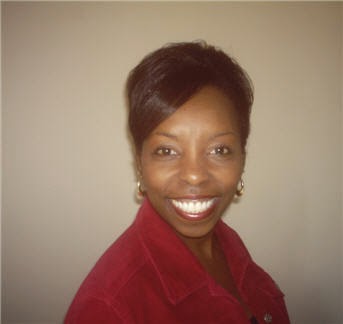 Bestselling author, Sharon C. Cooper, spent 10 years as a sheet metal worker. And while enjoying that unique line of work, she attended college in the evening and obtained her B.A. from Concordia University in Business Management with an emphasis in Communication.
Sharon is a romance-a-holic – loving anything that involves romance with a happily-ever-after, whether in books, movies or real life. She writes contemporary romance, as well as romantic suspense and enjoys rainy days, carpet picnics, and peanut butter and jelly sandwiches. When Sharon is not writing or working, she’s hanging out with her amazing husband, doing volunteer work or reading a good book (a romance of course).
Posted by gpangel at 1:00 AM