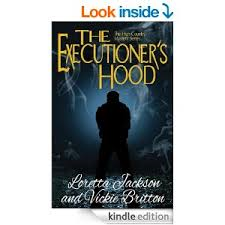 The Executioner's Hood by Loretta Jackson
My rating: 4 of 5 stars

The Executioner's Hood by Loretta Jackson and Vickie Britton is a 2014 self published/ independent publication. I was provided a copy of this book in exchange for an honest review.
Seven years ago a man committed suicide amid allegations he accepted a bribe that would give a lucrative contract to a man named Keefe. Nothing was ever proven but now a prominent judge has been murdered and a local committee member named Dawson suspects it ties in with the bribery charges from years past. But, the judge had enemies and one of them was Keefe. The judge had thrown the book at Keefe and given him a harsh sentence, and now Keefe is back home looking for revenge.
With Dawson feeling guilty for never having come forward with his suspicions all those years ago, he has now decided to help the Sheriff find out who murdered the judge. This part was really funny since Dawson didn't really have much tact and his interrogation skills were a little too blunt. Plus, he made no secret about his feelings which made him a target and the sheriff has enough to worry about without having keep his eye on Dawson all the time.
To further complicate matters, Jeff's girlfriend has been avoiding him and he thinks she may be seeing another man. Career ambitions and commitment issues are causing problems in the relationship and poor Jeff may not have gotten the best advice about how to deal with his personal issues.
In the background of all this drama is a the interesting history of the area and the various collections of guns and in the case of one collector an executioner's hood. The gruesome story behind the artifact is chilling and seeing it hanging from a wall has Jeff a little haunted by it. I enjoyed this part of the story and found the history very interesting. I love history being woven into stories. The mystery was really good and I think that this book will appeal to the cozy mystery lovers especially but all mystery readers would find the book appealing. The language is mild , there is no detailed graphic violence and the romance is kissing only. This makes the book a character driven novel and Dawson became my favorite because he was so smart, but so eccentric. He also has a heart of gold and although he got on the sheriff's nerves he was brave and did help the sheriff more than he might want to admit. I think these two will have a closer friendship from now on.
I give this one 4 stars. 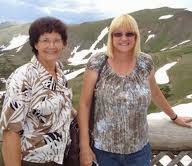 Vickie Britton lives in Hutchinson, Kansas with her husband, Roger, a geologist and computer consultant. Their son, Ed, and his wife Emily live in Salt Lake, where he works as game level designer.  Vickie has a degree in British Literature and has taken many courses in criminal justice and forensics.

Loretta Jackson resides in Junction City, Kansas.  She taught English and Creative Writing at the Pine Ridge Indian Reservation in South Dakota and at Mission Valley near Eskridge, Kansas.  Her interest include Native American culture and the history of the Old West.  She enjoys traveling with Vickie and researching the settings for their novels.
Posted by gpangel at 12:30 AM