THE BRIDE SAYS NO BY CATHY MAXWELL- A BOOK REVIEW 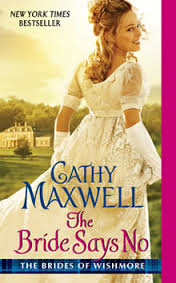 The Bride Says No by Cathy Maxwell
My rating: 4 of 5 stars

The Bride Says No (The Brides of Wishmore #1) by Cathy Maxwell is a 2014 Avon Publication. I was provided a copy of this book by the publisher and Edelweiss in exchange for an honest review.
BOOK BLURB:
Lady Aileen never thought she’d be in this position—falling in love with her sister’s betrothed! Of course, her sister did run away rather than marry him, and he doesn’t seem to be all that interested in her sister either, but even so, such a match is impossible...isn’t it?

Aileen is certain she must turn away from the man she loves in order to protect her sister’s reputation. However, he’s not one to give up without a fight, and now that he’s met a woman he wants to marry, nothing on earth could convince him to let Aileen go.

This book was a hilarious mix up of duty to marry vs marriage for love. The absurdity of arranged marriages and all the money and politics that put women up for sale basically is examined up close and it's not pretty. Aileen is one of those VERY rare ladies that has gone through a divorce. While her husband was abusive it was her alleged extramarital affair that had the divorce papers signed post- haste. Now, Aileen is back in her homeland of Scotland living a quiet unassuming life... until her younger half sister arrives.
Tara was to marry Blake, the bastard son a duke, but at the last moment she gets cold feet and runs away. She believes that three years ago she left behind the love of her life , a horse trainer named Ruary. She thinks she can just waltz back into this man's life and pick up where they left off. However, Ruary is engaged to another woman now. His feelings temporarily become confused with Tara's blatant pursuit of him. Meanwhile, Tara and Aileen are stunned when their father and Blake arrive and announce Tara is still engaged to Blake and they will indeed marry. But, when Blake and Aileen meet there is a chemistry between them. Soon, Aileen and Blake are falling in love and Tara is being spurned by Ruary and is now desperate to marry Blake. That should give you an idea of how mangled this whole thing has become.
Tara is not a character I felt any warmth for and that is what the author intended. She is all about doing what serves her best interest. She doesn't want Blake anymore than he wants her, but if she can't have her horse trainer she is set on settling for Blake. She never stops to consider the feelings of others. She gets Ruary in trouble with Jane and has him confused as to how he feels about Tara. She also jerks Blake back and forth more than once and it doesn't matter to her one wit about her sister's feelings toward Blake. She is selfish, immature, and spoiled and has no idea what she really wants.
Saying Aileen is bitter about love and marriage is a massive understatement. She is sick about her father's arrangement for Tara after her own arranged marriage was such a disaster. She practically pounds the pulpit in an effort to convince her father, Blake and Tara that arranged marriages and selling women off for money , or in Blake's situation, a chance to legitimize himself and have heirs that would inherit without the "bastard" label he carries now.
Blake is pretty much in agreement with Aileen on matters of the heart and he respects her far more than he does Tara. When he learns of Aileen's troubled marriage and her father's deplorable behavior towards her , he begins to see that all the tongue wagging gossips are very wrong about Aileen. It was never the intention of Aileen or Blake to fall in love, but fall in love they did. But, Tara is not finished with Blake. She may not know her own mind , but she's not leaving Scotland without a wedding ceremony.
The steam level is very low in this one, but there was a reason for that. The plot would not have worked if things had gone too far between any of the characters caught in the web they were all dragged into.
The epilogue will have you howling when you realize that Tara and Aileen's father did not learn his lesson the first two times he tried to arrange marriages for his daughters because he can't manage his own affairs. It seems he's at it again and book two in this series promises to be just as much fun as this first one.
Cathy Maxwell is a seasoned historical romance author and I have enjoyed many of her books, this one is no exception. 4 stars 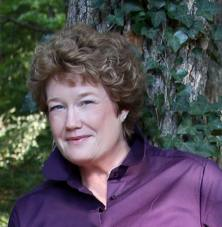 CATHY MAXWELL spends hours in front of her computer pondering the question, "Why do people fall in love?" It remains for her the mystery of life and the secret to happiness.

She lives in beautiful Virginia with her children, horses, dogs, and cats.
Posted by gpangel at 1:30 AM