SCANDAL: A MANUAL BY GEORGE RUSH AND JOANNE MALLOY- A BOOK REVIEW 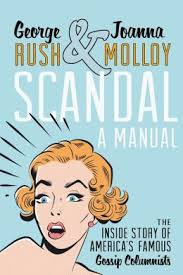 Scandal Sheet: The Inside Story of America's Famous Gossip Columnists by George Rush
My rating: 4 of 5 stars

Scandal Sheet: The Inside Story of America's Famous Gossip Columnists by George Rush and Joanna Malloy is a Skyhorse Publication. This book is slated for an October, 2013 release.

George Rush and Joanna Malloy are the famous husband and wife team of gossip columns. Neither of them set out to become gossip columnist. Each of them beginning their careers as journalist in one way or the other.
However, they created a niche for themselves with their column. Their seventeen years with The Daily News made them almost as famous as the people they wrote about.

From Sarah Jessica Parker and Sean Penn to mayors and presidents, to rappers, to rock stars this couple has seen and heard it all- then reported it.
Dinner at Elaine's to box seats at pro sports games, award shows, you name it, the couple rubbed elbows with millionaires and billionaires and the upper crust of society. While they made many friends in the business of celebrity, they also made a lot of enemies, and sometimes frienemies.
At times they showed no mercy toward a philandering husband and dissed him at every turn, but could then be very compassionate in keeping a story under their hats, so to speak. Sometimes they were thanked profusely and sometimes they were yelled at and threatened.
The stories related here are told with humor and a touch of nostalgia. You won't believe some of things George and Joanna saw and heard that never made it into print. Some of these stories are hilarious and some are shocking and sometimes I felt bad for a celebrity - though not often.
At any rate, you will have a different perspective on the world of celebrity after you read this book.
Highly entertaining, but also educational and insightful. Thanks to the publisher and Edelweiss for the DRC of this book.
Over all a solid A.