A PHOTOGRAPHIC DEATH BY JUDI CULBERTSON- A BOOK REVIEW 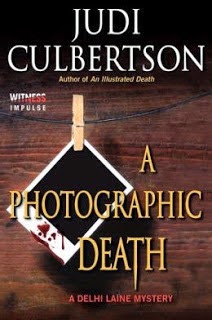 A Photographic Death: A Delhi Laine Mystery by Judi Culbertson
My rating: 4 of 5 stars

A Photographic Death : A Delhi Laine Mystery by Judi Culbertson is a 2014 Witness Impulse publication. I was provided a copy of this book by the publisher and Edelweiss in exchange for an honest review.


Delhi and her husband Colin had four children, but nineteen years ago one of their twin girls drowned in a river. When Delhi receives an anonymous note claiming her daughter did not in fact drown, she decides it's high time her remaining children are told the specifics of what happened all those years ago. Colin has not been living with Delhi for nearly a year and is adamantly opposed to bringing those painful memories back up. But, if there was the slightest chance her daughter was still alive Delhi had at least try to find out if the note was just a cruel prank or if there was more to it.

This mystery was certainly absorbing. I was invested right away and read this practically in one sitting. Delhi and Colin certainly have an odd relationship and their children are sort of caught in the middle of what is going on with their parents. When Hannah finds out she had a twin, her reaction was rather muted. It was Jane that took the interest in helping her mother discover what really happened to Caitlin. Their investigation stirs up a hornets nest and Delhi finds herself in serious danger as she begins to uncover more crimes than the possible kidnapping of her daughter. Also, quite strange was Colin's reaction to the idea that his daughter could still be alive. I never warmed up to that guy even if did finally admit the kidnapping was plausible after all. I don't know what will happen with Delhi and Colin as far as their marriage is concerned, but I kind of hope she goes her own way.

The truth about Caitlin and what really happened to her will probably become obvious to the readers at some point in the story. You won't guess the specifics and you won't realize how invested in the situation some of the characters are, which kept me turning those pages, but you will start to piece together an incredible story that will leave you feeling numb. How on earth could someone do such a thing?
The conclusion of the book leaves the reader with the task of drawing their own conclusion about how things will work from here on out. I'm not sure how I felt about the ending. I think this would make a great book club read because there are certainly many layers of in the book that would make for some lively conversation.
Overall this was a compelling read although I could sort of see through the plot. I do plan on reading more from this author. I'm super curious about Delhi's character and what she will get up to next.


Judi Culbertson is the author of thirteen published  books.  Soon after  graduating from Wheaton College she published GAMES CHRISTIANS PLAY (Harper & Row, 1967), followed by THE LITTLE WHITE BOOK ON RACE (Lippincott, 1970).  As well as parenthood and a day job as a social worker, she wrote stories for literary magazines and published articles in Glamour, The New York Times, Newsday, Cosmopolitan, Woman's Day, Working Mother, and others.
In 1986, after a trip to Paris, Judi and her husband, Tom Randall, wrote PERMANENT PARISIANS, An Illustrated Biographical Guide to the Cemeteries of Paris, published in 1987 by Chelsea Green Press.  Other in the series include New York, London, California, and Italy.
Judi's other books include a mystery, THE NURSERY (St. Martin's Press, 1996), SCALING DOWN, Living Large in a Smaller Space, with Marj Decker (Rodale 2005) and THE CLUTTER CURE (McGraw-Hill, 2007).  Since leaving social work in 1999, Judi developed her used and rare book business.  It is this background that helped create the Secondhand Prose Mystery Series.  A NOVEL DEATH, published by Avalon Books in June 2011, is the first book in the series.  AN ILLUSTRATED DEATH was published on October 1, 2013 by Harper/Collins. A PHOTOGRAPHIC DEATH is scheduled for May 27, 2014.
Posted by gpangel at 1:30 AM