TRIALS OF ARTEMIS BY SUE LONDON 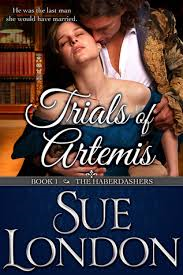 Trials of Artemis by Sue London
My rating: 4 of 5 stars

Trials of Artemis by Sue London is a 2013 Graythorn Publishing release. I was provided a copy of this book in exchange for an honest review.
Jacqueline Walters is part of a group of ladies that started a "club" as children they named "The Haberdashers". Each of them carried a masculine name instead of using their real names. "Jack" is Jacqueline's nickname. When her sister Samantha attends her first ball, Jack a loyal bluestocking decides to check out the library and a case of mistaken identity has her caught in the arms of Gideon Wolfe, the Earl of Harrington. The compromising position only has one way out and that's marriage.
Jack and Gideon both have preconceived notions about the opposite sex. They are both a little depressed about the marriage they are forced into, but Gideon decides to make the best of the situation if he can. It takes a little time, but before long the arguments even out and it looks like the two could make a match after all. But of course things are never that easy. Gideon fails to understand his wife's feelings about women's rights and then he gets himself in a serious tussle and Jack will have to come to HIS rescue.
This was a really entertaining regency period novel and I am impressed that the author stayed true to the period's social requirements. The couple were married before they consummated the relationship, something we might roll our eyes at today, but in those days premarital sex was very rare for ladies. The laws concerning women and the attitudes men had without apology are really infuriating, but that is really how things were in this period. So, for me this series got off to a great start. Jack is not a whiny, spoiled girl who no brain in her head. She enjoys reading, archery and can shoot a gun as well as most men. Gideon means well most of the time, but he just never met a woman like Jack. Sometimes, I felt sorry for Gideon because he was just clueless about some things. He was however, quite educated on how to please a woman in the bedroom and proceeded to teach his new bride a few things.
This was a really fun way to spend the afternoon. I am putting the next book in the series in the queue right now!
4 stars