TERMS OF SURRENDER BY LORRIE FARRELLY- REVIEW AND INTERVIEW 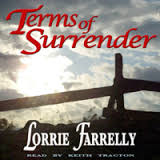 Terms of Surrender by Lorrie Farrelly
My rating: 4 of 5 stars

Terms of Surrender by Lorrie Farrelly is an independently published 2010 release. I was provided a copy of this book by the author in exchange for an honest review.
Michael Cantrell is reeling from the effects of the Civil War. After losing his young brother and suffering from the massive loss of life witnessed during the war, Michael is empty on the inside. He has vowed to never set himself up to care for anyone else like he had for his brother because he couldn't bear the pain of losing them. Meeting the beautiful Annie Devlin makes sticking to the promise he made to himself very hard to keep.
Annie is alone except for her brother Robbie. The two of them come under attack and Annie is nearly raped. Now she must tend to Micheal's wounds after he comes to her rescue. Once Michael is feeling a bit better he sees Annie's need for some help around her place . He forges a bond with Robbie and before long it seems he is finding it hard to leave.
As Annie and her brother fight against a ruthless rancher for her land she shows Michael that being emotionally involved with people is what makes life worth living. She shows him that he is not hopeless after all. He still has a lot to offer and Annie will slowly chisel away at his emotional wounds while Michael heals from his physical ones.
I loved this Western Historical romance because of it's authenticity, it's wonderful story , the flawed characters, the hope it represents and above all the power of love. There are a few really emotional scenes that will have you reaching for that box of tissues. I loved Annie's character, her willingness to put others before herself, her strength of character and how she wins the hardened and broken Michael in more ways than one.
Michael is a character that has seen too much death in the war, lost his younger brother and has blamed himself. He still managed to command the respect of many and still has friends who will have his back no matter what. Michael found the conflict between the states a very difficult one for him personally as he would like to back one side, but found he couldn't fight against his own people. I'm sure that was a feeling a lot of folks probably had. He is still an honorable man that feels things deeper than he wants to admit. Though wounded in spirit, his still finds it within himself to help Annie and her brother and the payoff will be a life he never could have dreamed for himself.
I don't read a lot of Western Historical novels because they seem to be a lot harder to find these days. There are a slew of contemporary novels with cowboys or ranchers in them, but the good old historical western romances are not as common. I really would like to see more like this one. If you like historical romances you should give this one a try. Well written with a female protagonist that doesn't whine or pout, a strong but conflicted hero that is touched by the healing power of love, and awesome HEA!!
This one gets an A ( 4.5 stars) 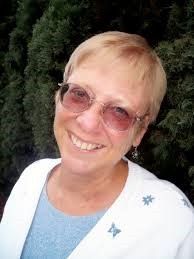 I AM SO PLEASED TO WELCOME LORRIE TO THE BOOK REVIEW TODAY!!  THANK YOU SO MUCH FOR JOINING US!

1) How long have you been writing as a professional?

My debut novel, TERMS OF SURRENDER, was first published in 2010. I’ve always loved to write, but with a full-time teaching career and kids to raise, I couldn’t devote as much time to it as I would have liked until recent years.

2) What were your favorite books as a child?

These are books I loved, and still do (and thanks to eBay and other used book sites, I’ve got them on my bookshelves once again!):

The Secret Garden by Frances Hodgson Burnett, The Black Stallion series by Walter Farley, Little Men by Louisa May Alcott, Rifles for Watie by Harold Keith, The Boxcar Children by Gertrude Chandler Warner, Sawdust in His Shoes by Eloise Jarvis McGraw, The Lion’s Paw by Robb White, Celia Garth by Gwen Bristow, and Johnny Tremain by Esther Forbes. Looking at this list now, I realize I loved dramatic, deeply felt adventures – often historical – that involved intelligent and courageous children and youths, and very often animals, as well – especially horses. And a satisfying ending was a must!

3) Besides Western Historical Romance, what other genres have you written in?

TIMELAPSE is a time-travel/sci fi romantic adventure, DANGEROUS is contemporary romantic suspense, and THE GUARDIAN’S ANGEL is a paranormal romantic thriller. All of my novels have a touch, and sometimes much more, of the paranormal. One of the most popular characters in the series that begins with TERMS OF SURRENDER is a young man – hardly more than a boy, really – who considers his death on the Antietam battlefield little more than an inconvenience.

4) What are you reading now?

5) Would you recommend writing as a career?

Only if that’s what one feels truly inspired to do, and then, as with acting and other artistic pursuits, it’s best to have another means of support as well. But by all means, if your heart compels you to write, write!

I love to hear from readers! Everyone can find me at:

I’m all for fun! I love to write, read, travel, go to the movies, and most of all, have fun with my family. We’re a big Disney family – my son works at Disneyland, and one of my daughters and I are former Disney "cast members." (The other daughter worked at Chuck E. Cheese for a while, wearing the Chuck E. costume. I got to refer to her as "my daughter, the rat." LOL)

8) What are you working on now?

I’m working on another Western-themed novel, as well as several short stories.

It would be easier to name a dessert I didn’t love! When the pastry cart rolls by, my choice is "Yes!" And I’ll have those à la mode, please!

I don’t drink either coffee or tea; I’m a Diet Pepsi-holic.

Favorite movie is tough, because I love movies! I’m a huge Steven Spielberg and George Lucas fan. (Well, okay, not "Howard the Duck." That one’s best forgotten.) I love the original Star Wars and Indiana Jones movies, "Jaws," "Jurassic Park," and scary (but non-slasher) movies. The first "Paranormal Activity" movie was so creepy, I hid my eyes and missed the whole ending. I had to ask my kids what happened! On the more serious side, I loved "Gettysburg," "To Kill a Mockingbird," and "Philomena."

"Dogs or cats" is another "Yes!" question, as I have several of each. I have to say, though, that my favorite is my big old Maine Coon cat, Hobbie. He’s cheerfully confident that he’s the absolute center of the universe, and he’s the only cat I’ve ever had who loved to ride in the car. He also somehow caught a full-grown duck once. There it was, waddling around the living room, none the worse for wear, while Hobbie smirked, "Look what I got! Cool, huh?"

My favorite quote always seems to speak to most situations in life: "We’re gonna need a bigger boat!"

Thank you, Julie, for inviting me to visit with you. I had a great time!

Lorrie's books can be found at Amazon.com in the Kindle Store-www.amazon.com/Lorrie-Farrelly/e/B008P3LJ0O‎
View share