BEYOND EVENTIDE: BOUND BY SARAH M. CRADIT- A HOUSE OF CRIMSON & CLOVER NOVELLA 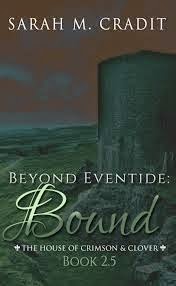 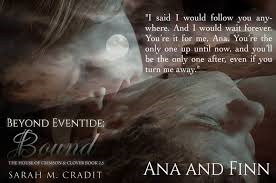 Beyond Eventide: Bound by Sarah M. Cradit
My rating: 5 of 5 stars

Beyond Eventide: Bound- A House of Crimson & Clover novel- Book 2.5 by Sarah M. Cradit is a 2014 publication. I was provided a copy of this book by the author in exchange for an honest review.
In this novella we pick up the story with Ana being with Aidrick. Ana is pregnant and Aidrick has used a bit of unfair persuasion to get her to go away with him.
Back in New Orleans, Nicolas is out of his element dealing with family dynamics. He has passed over his right as heir to Ana and to her unborn son. However, it is decided that in order for Aleksandr to be the rightful heir he must be born in wedlock. Naturally, under the circumstances that's going to be a litte hard to arrange. The usually smart mouthed Nicolas is no longer his confident self.
Finn? Well, our hearts go out to Finn. He knows Ana loves him, but she loves Aidrick also. So, Finn does a lot of meditating and thinking until it is determined that he must find Ana and marry her to save the Deschanel family. Along with him on the journey is Ana's cousin, Anne and Tristan. To complicate matters, Anne has fallen in love with Finn and can not stand this entire situation. She really does not like Ana and believes Finn deserves better.
Ana? She is not doing so well. She had accepted her role but as her pregnancy advances so does her depression. It seems that having her heart halved by loving two men is slowly killing her. This makes it even more important for Finn to find her.
This is one of my favorite series. The author is wise to continue to move the series along in different directions. Each book leaves us feeling satisfied, but anticipating the next step. This story has not one, but two love triangles. The unassuming and mild mannered Finn is really appealing to the ladies. He will appeal to the reader too, since he has the ability to be a "book boyfriend". No, he is not alpha or a warrior in tartan, or anything like that , but he is very strong from an emotional standpoint and will go to great lengths to save the woman he loves. He will also compromise in order for the relationship to work. So, in the end we will have to see who has the greater will- is it Aridrik or Finn?
The distressing part of the story is Ana's physical and mental condition. We have always known Ana to be fragile when it comes believing she is deserving of love. However, she has never been like this. Will Finn make to her before their son is born?
But, the funniest thing was seeing Nicolas actually at a loss at to how to handle things. Yes, he's still a butt at times, but in this story he has lost some of that edge... not totally, but a little. So, this will be a good lesson for Nicolas. He will learn he is not in control of everything like he always seemed to think he was. Is it possibly Nicolas could be learning a little humility?
This book is the bridge that leads to the next foray into the series that suggest yet another turn in the road. I'm excited to see where the author will take us next!
If you enjoy paranormal romance, fantasy, family secrets and drama, and well developed characters I really think you will love this series. A+ all the way! (5 stars) 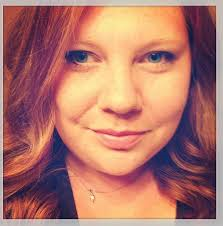 Sarah is the author of the Paranormal Southern Fiction series, The House of Crimson and Clover. The series was born of her combined love of New Orleans, family dramas, and the mysterious nature of love and desire. Her books combine elements of paranormal, mystery, suspense, intrigue, romance, and even mild fantasy. She is always working on the next book in the mysterious world of the Sullivans and Deschanels.
Sarah lives in the Pacific Northwest, but has traveled the world from Asia to Europe to Africa. When she isn't working (either at her day career, or hard at work at writing), she is reading and discovering new authors. The great loves of her life (in order) are: her husband James, writing, and traveling the world.
Feel free to contact Sarah.
She absolutely loves connecting with her fans:
Official Website: http://www.sarahmcradit.com
Facebook: http://www.facebook.com/houseofcrimsonandclover
Twitter: @thewritersarah 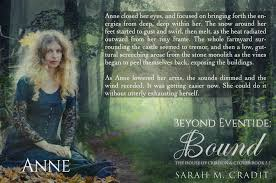