THE RAIDER BY MONICA MCCARTY 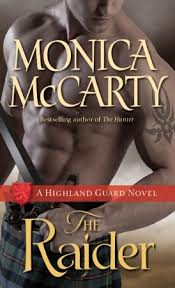 The Raider by Monica McCarty
My rating: 4 of 5 stars

The Raider by Monica McCarty is a 2014 Ballantine Books publication. I was provided a copy of this book by the publisher and Netgalley in exchange for an honest review.

As a teenage girl, Lady Rosalin Clifford freed Robert Boyd and saved him from execution. Now six years later, her lofty ideals and prinicples are being put to the test. Rosalin and her nephew have been taken hostage by Boyd the infamous "Raider". Rosalin recognizes him at once, but Boyd is a little slow to catch on. Once he realizes that the sweet angel that freed him six years ago is a Clifford, he can't comprehend it. Boyd HATES the English with a passion. Having Rosalin and her nephew as hostages couldn't be better. That is until he finds he is beginning to care for Rosalin.
Rosalin spent the past six years feeling guilty about freeing Boyd. She thought she saw something in him that was honorable and of course her romantic inclinations at that age also played a role. Now, Rosalin is sadded to see that the man she freed has changed. He fights only out of bitterness and hatred. He has forgotten the reasons behind this war and has lost perspective. While Rosalin, who is bethrothed, finds that after six years her feelings for Boyd haven't wavered, she is ready to throw away all she has ever known for the love of this one man.
Boyd, however, continues to struggle with the fact that Rosalin is English, that he hates her brother, and that she makes him feel something he has never felt before. As a result he is at once romantic, passisonate, and a stubborn jerk that only thinks of himself and his situation without once considering what Rosalin is prepared to do on his behalf.
Ultimately, a show down will force The Raider to make a decision between this war and the lady he loves.
Rosalin is a strong willed and principled woman with a clear set of values she tries to stick to. She doesn't understand all the politics of war, and of course she has been protected from the ugliness of battle until she finds herself kidnapped and at the mercy of this rather brutish group of people. Rosalin will learn first hand the horrors of battle as she sees things from Robert's point of view. She will fight against the physical violence she sees perpetrated against the women she is encamped with, and she will show Robert what true unconditional love is really about.
Boyd has held onto his hate for so long he doesn't know how to feel anything else. It consumes every part of his life until he finds himself not only in a battle against the English but a battle within his own self when a new unsettling feeling begins to grow in his heart. These feelings will come between him and his long time comrades and force him to reevaluate everything he has known for most of his life. This is not an easy thing for this hardened warrior. When he stands to lose the woman he loves it will be Robert's turn to decide on what side he will stand on- his pride or true love. Which one will he chose?
A wonderful Scottish romance featuring characters taken from the pages of true history. Monica McCarty is always coming up with great stories and romances that have authenticity, humor, steamy romance against the backdrop of the Scottish Highlands. It's a combination that is hard to resist. This is another wonderful outing for Ms. McCarty. Overall this one is an A.