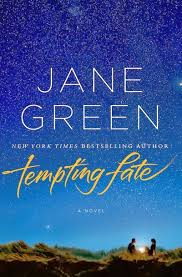 Tempting Fate by Jane Green
My rating: 4 of 5 stars

Tempting Fate by Jane Green is a 2014 St. Martin's Press Publication. I was provided a copy of this book by the publisher and Netgalley in exchange for an honest review.

Gabby is in her early forties, married happily for the most part and raising two children. While her husband, Elliot, takes the girls on a camping trip, Gabby goes out with a group of her friends for a ladies night out. Gabby meets a much younger man at the bar named Matt. She winds up drinking too much and talking all night with Matt, and she nearly makes a mistake that night. She wakes up the next morning very relieved she didn't do something stupid. But, Gabby can't get Matt out of her mind. He made her feel young again. He made her feel attractive and desired which at her age was something she needed to feel more than ever before. Soon, there are exchanged emails and text messages between herself and Matt. Gabby begins thinking about her weight, her hair , her appearance and is practically walking on air. She feels guilty though as well. She's moody and more argumentative with Elliot and her two teenage daughters. But, quit communication with Matt? Gabby just can't do it. As we all know, at least in the rational part of our brains, that if you play with fire, you'll get burned.
Gabby and Elliot's marriage wasn't perfect by any means. Elliot did make a decision that Gabby should have had a say in and so for years Gabby has harbored resentment towards him. It's not something she dwells on continuously, but it is still something that hurts her deeply and she lives with the pain of it every day. While this does perhaps play a role in what Gabby is thinking when she starts an emotional affair with Matt, mostly it has to do with the longing for that newness in a relationship that usually deepens into true love after a time. But, that wonderful, addictive honeymoon period is so tantalizing. It fills us with so many emotions and positive feelings that new love can bring into our lives and after nearly twenty years of marriage, that kind of thing is hard to recapture. Sooner or later that part of the relationship will cool off and that is when you realize a much deeper depth of feeling and love, if you stick it out. I can understand Gabby is some ways. She feels flattered by the attention of a younger man, she wants to be attractive to him and worries about the age difference. Gabby was hardly a vain woman, but after meeting Matt she begins to spend much more time on her looks, something Elliot has never really encouraged. The thing is, Gabby knows that this is wrong. She has a solid relationship with her husband and she has two daughters that would also reap the consequences of Gabby's actions. That all consuming passion and light as air feeling that is all so brief was not worth the pain and heartbreak that everyone got sucked into. Adultery is always a bad thing. Always.
Gabby of course will learn this the hard way. She will also learn who her true friends are. The upside to all of the drama is that Gabby makes a new connection with her mother, with whom she has had a rather rocky relationship in the past. There were some good things that came about which I can't reveal and for Gabby the way things turn out for her is about the best it could get.
Adultery is a touchy subject and one that has me on pins and needles when I read a book like this. The tension is almost as unbearable as when reading a suspense novel. I wanted to crawl into the pages and scream at Gabby- DO NOT DO IT! I know there will only be heartache and pain if she goes on with things and I must sit back and watch the building storm clouds turn into a huge tornado and reap destruction on everything in it's path. The author does a fine job of giving the reader insight into human nature and all the reactions to a situation like this one. The friends, the family, the community who all weigh in and have their own good or bad responses to what is going on with Gabby. In this case Gabby manages to rebuild some of the damage she caused, but in reality this outcome would most likely never occur. Despite that I was pleased to see things turn out like they did . While this is a book heavy on drama, this is not a depressing read. It is a cautionary tale for sure. At any given time any of us could find ourselves tempted in the way Gabby was. We tell ourselves we would never do what Gabby did. But, the truth is- you might. Gabby never went out looking for an affair. It was pure chance that she met Matt. At her age she should have known better, but we are all vulnerable no matter how strong or weak our relationship is with our significant other. So, before you go trading in a good thing for the brief intensity of an affair, think about the long term outcome of your decision. This was a well written novel that never got on a soap box or became preachy. The author let the characters make their own choices and showed us what happened as a result. This is a very absorbing story that I would recommend to those that enjoy women's fiction or contemporary fiction. Overall this one is an A. 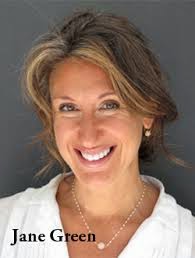 Jane Green's fifteenth novel, Tempting Fate, is soon to be released; she is the author of fourteen previous New York Times Bestselling novels. Initially known for writing about single thirty-somethings, she has gone on to write mature stories about real women dealing with all the things life throws at them, with her trademark wisdom, wit and warmth.

A former feature writer for the Daily Express in the UK, Green took a leap in faith when she left, in 1996, to freelance and work on a novel. Seven months later, there was a bidding war for her first book, Straight Talking, the saga of a single career girl looking for the right man. The novel was an immediate top-ten bestseller in England, and Green was an overnight success.

Now in her forties, Green has graduated to more complex, character-driven novels that explore the concerns of real women's lives, from marriage (The Other Woman) to motherhood (Another Piece of My Heart) to divorce, stepchildren, affairs, and most recently, midlife crises (Family Pictures and Tempting Fate).

She joined the ABC News team to write A Modern Fairytale - their first enhanced digital book - about the history of Royal marriages, then joined ABC News Radio as a live correspondent covering Prince William's wedding to Kate Middleton. She has written a micro-series for Dove starring Alicia Keyes, many short stories, and has contributed to various anthologies, as well as regularly appearing on television shows including Good Morning America, The Martha Stewart show, and The Today Show.

Together with writing books and blogs, she contributes to various publications, both online and print, including Huffington Post, The Sunday Times, Cosmopolitan and Self, has taught at writers conferences, and does regular keynote speaking.

A foodie and passionate cook, Green filled one of her books, Promises to Keep, with recipes culled from her own collection. She says she only cooks food that is “incredibly easy, but has to look as if you have slaved over a hot stove for hours.” This is because she has six children, and has realised that “when you have six children, nobody ever invites you anywhere.”

Most weekends see her cooking for a minimum of twenty people in her home in Westport, Connecticut, where she lives with her husband and their blended family. When she is not writing, cooking, gardening, filling her house with friends and herding chickens, she is usually thanking the Lord for caffeine-filled energy drinks.