NEED YOU TONIGHT BY RONI LOREN SPOTLIGHT AND REVIEW + GIVEAWAY 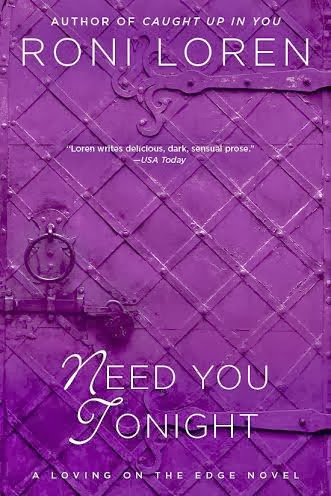 
She’s making a wish list, and he wants to be on top.

From foster kid to trophy wife, Tessa McAllen is about to reinvent herself all over again—and defy every insult her cheating ex-husband ever used against her: Selfish? She’s championing a charity. Stupid? She’s getting her degree.

Kade Vandergriff can help her with that one. When they encounter each other at a singles event held at one of his restaurants, Tessa blurts out that kink is for girls who try too hard, and Kade instantly wants to show this sassy stranger how thrilling a night under his command can be…...but when he learns her name, the game changes for both of them.

In high school, Tessa was the popular girl who stuttering, awkward Kade fell for. But she chose another. Now, as she eagerly learns lesson after lesson, he’s going to make sure she never forgets him again. 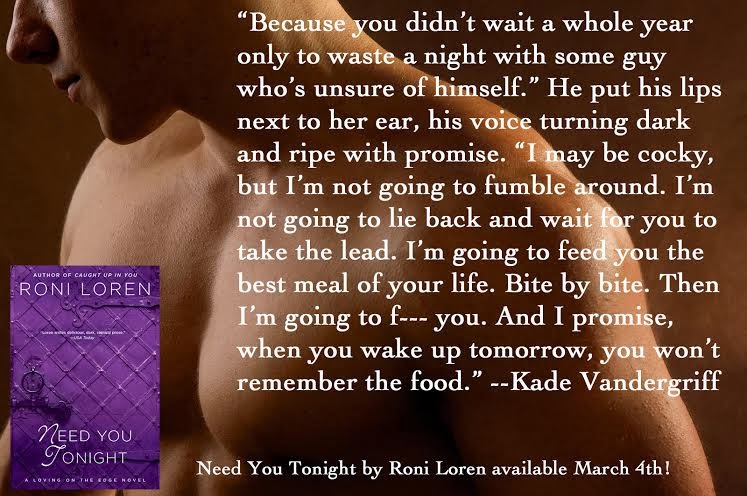 Giveaway Info:
LEAVE A COMMENT FOR A CHANCE TO WIN A BOX SET OF RIDING DESIRE IN DIGITAL FORMAT.


(Tessa’s best friend has tricked her into coming to a dating event.) 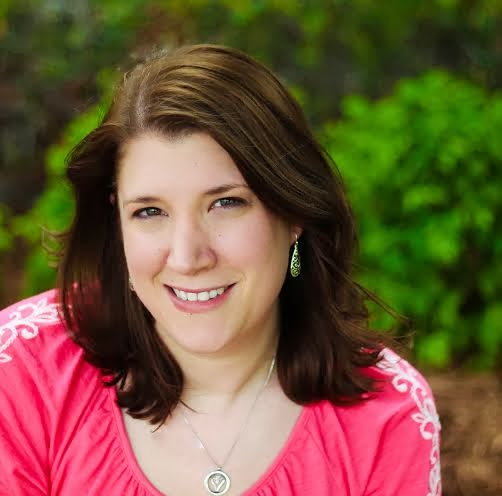 Roni wrote her first romance novel at age fifteen when she discovered writing about boys was way easier than actually talking to them. Since then, her flirting skills haven’t improved, but she likes to think her storytelling ability has. Though she’ll forever be a New Orleans girl at heart, she now lives in Dallas with her husband and son.

If she’s not working on her latest sexy story, you can find her reading, watching reality television, or indulging in her unhealthy addiction to rockstars, er, rock concerts. Yeah, that's it. She is the National Bestselling Author of The Loving on the Edge series from Berkley Heat.

Need You Tonight by Roni Loren
My rating: 4 of 5 stars

Need You Tonight by Roni Loren is a 2014 Berkley publication. I was provided a copy of this book in exchange for an honest review.
Tessa catches her husband Doug and her best friend in throes of passion. Doug says some nastier things than usual and now it's D-I-V-O-R-C-E. Doug is all Tessa has really known. She has dated him since high school and has built a life around him. They had a financially comfortable exsistance and Tessa mainly worked with charitable organizations.


Out with the girls one night Tessa meets "Van". A hot night with a hot guy is just what Tessa needs to give her back a little of the confidence Doug has stolen from her. When Tessa and Van are put in a dangerous situation that requires an ambulance, Van, aka - Kade is stunned to discover that his "Contessa" is Tessa, the girl he was head over heels in love with in high school. Kade was a very different guy back then. He was the smart guy that tutored those having trouble with their grades, and he had an unfortunate speech impediment that caused him to be teased a lot. This is a stark contrast with the current day Kade, a good looking and successful guy that has his pick of women. Once Kade realizes who he just spent a hot night with he is determined to keep her in his sights.


It took Tessa awhile to realize that Kade was Kaden from high school. Her ex- husband had bullied Kaden and had beaten him up badly on one occasion. With Doug continuing to harrass Tessa, her eyes open up to the kind of man Doug really is and always was. In the meantime, Kade introduces Tessa to his world of sex clubs and threesomes among other things. Tessa has been in a plain vanilla sexual relationship due to Doug's idea of how a wife should behave in the bedroom. So. while uncomfortable with some things, Tessa agrees to go along with Kade in his sex games, and finds she enjoys it.


I will tell you all the plain simple truth. I don't usually read this type of erotica. I'm just too old for this type of romance novel to appeal to me. I signed on to do a blog tour for this book and asked to review without realizing fully what type of erotica we were talking about, which is my fault. So, I must admit this is not my cup of tea, but I did like the story sans the BDSM parts. I liked how Kade transformed himself into a confident sucessful man and I loved how the lovers have a second chance at a relationship now that Tessa has seen Doug's true colors. I also liked Tessa's sexual awakening and this could still have happened without the belts and menage, which is outside my normal comfort zone. Having said all that , I still enjoyed the book for the most part . Doug getting his comuppance was maybe the highlight of the book and much deserved. If you are into this genre of romance then I really think you will like this book. It has a good love story and a strong plot and not just a enough conversation to warrant the sex scenes.
Overall I will give this book a B.