The Girls at 17 Swann Street

The Girls at 17 Swann Street

MRS.POE BY LYNN CULLEN- A REVIEW 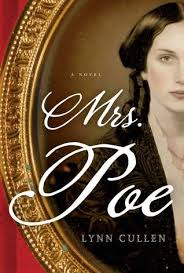 Mrs. Poe by Lynn Cullen
My rating: 5 of 5 stars

Mrs. Poe by Lynn Cullen is a 2013 Gallery Books publication. I was provided a copy of this book by the publisher and Edelweiss in exchange for an honest review.
Everyone is aware of the tragic story of Virginia Poe who died at twenty-four of consumption. (TB) In our minds we feel nothing but complete sadness at the loss of life at such a young age. Most of us are also aware of Edgar Allen Poe's life story which was drenched in death and sorrow. Rumors did surface that "Eddie" was having an affair with the children's author and poet Frances Osgood. There is much debate today among historians as to whether or not there was really an affair. Chances are it was as Frances tried to explain- a publicity stunt, more or less. If the two were having an affair it would seem odd that Poe's ailing wife would strike up a friendship with the very woman her husband was infactuated with. Again ,over the years this has sparked much debate.
Frances was married herself, but her artist husband was seldom at home. He was a notorious philanderer and pretty much abandoned Frances and their two daughters. Frances was given hospitality by a married couple who let her live in their home with her children.
Poe and Virginia lived with Poe's aunt and Virginia's mother in moderate financial circumstances. Poe never achieved any great wealth and in the last years of his life he was quite poor. It is said he always treated his wife kindly and gave in to her readily.
This book paints a very different version of events that opposes what we would like to believe. Poe is painted as a man who runs from the reality of his wife's illness, lies to his alleged lover about the seriousness of Virginia' health, and quite bluntly tells Frances he has grown weary of Virginia. He leads Frances to believe he only married Virginia because he was young and lonely and it was merely conveinent at the time. Virginia , a girl still, despite the fact she has been married for ten years and is in her twenties, has always been a figure of great sympathy. The way Edgar mourned her after her death would hint at his having strong emotional ties to her, but this novel paints Virginia as a possible villian. A girl well aware that her husband has begun a rather public flirtation with Frances and is more jealous than people were lead to believe. In fact, little Virginia, who is weak, sickly, and frail couldn't possible be responsible for some of the things Frances has begun to suspect her of... or could she?
Frances is ridden with guilt over the affair. She doesn't love her husband, but for the sake of her daughters she keeps up appearances, or at least tries to. So, the only guilt she has over her feelings for Eddie , is for his wife. In this version of events, Virginia may appear obtuse and socially awkward, but in fact she is quite cunning. Dangerous, in fact. But, is Virginia really responsible for these events or is it Frances's guilty conscience? Is Edgar right- have they all gone mad?
No matter how you portray Virginia, it still seems that she adored Eddie. If indeed he was having an affair, and if Virginia did rise to the occasion and attempt to put an end to it, I still couldn't help but feel badly for her. I could also imagine Edgar finding a woman that had the same interest as himself and being a little more worldly appealing to his intelligence and being human, he may have had an attraction to Frances. But, then again, he may have only wished to help her career along. Frances could have had a little crush on Poe, after all she didn't have a love match with her husband and by all accounts Poe was fond of her. Either way, it is not beyond the realm of possiblities that the two found comfort from each other. No one really knows for sure and that is why these novels are so interesting. I liked the idea the author gave us that Virginia may have been less naive that people thought, that she had a backbone, and that she may have been as dark as her husband. This is what makes historical fiction so fun. Sometimes we were left with a bare amount of real fact about certain things and this gives us the chance to speculate on how things might have been. The author actually paints a believable and plausible story, especially when we finally get to the end of the book and see that all the participants were indeed a little mad. You know that the story is not going to end well. After Virginia's death, there were still many more tragedies. Poe, Frances and a child that could have been Eddie's all died quite young and in the prime of their lives. I was engrossed from start to finish. If you like historical fiction, this book will certainly give you plenty to speculate about. This would be a great Book Club read as well.
Over all this one is a 4.5 star rating - A 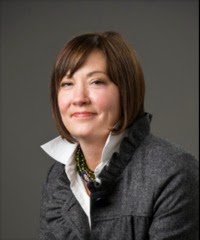 Lynn Cullen grew up in Fort Wayne, Indiana, the fifth girl in a family of seven children. She learned to love history combined with traveling while visiting historic sites across the U.S. on annual family camping trips. She attended Indiana University in Bloomington and Fort Wayne, and took writing classes with Tom McHaney at Georgia State. She wrote children’s books as her three daughters were growing up, while working in a pediatric office and later, at Emory University on the editorial staff of a psychoanalytic journal. While her camping expeditions across the States have become fact-finding missions across Europe, she still loves digging into the past. She does not miss, however, sleeping in musty sleeping bags. Or eating canned fruit cocktail. She now lives in Atlanta with her husband, their dog, and two unscrupulous cats.
Lynn Cullen is the author of The Creation of Eve, named among the best fiction books of 2010 by The Atlanta Journal-Constitution and as an April 2010 Indie Next selection. She is also the author of numerous award-winning books for children, including the young adult novel I Am Rembrandt’s Daughter, which was a 2007 Barnes & Noble “Discover Great New Writers” selection, and an ALA Best Book of 2008. Her novel, Reign of Madness, about Juana the Mad, daughter of the Spanish Monarchs Isabella and Ferdinand, was chosen as a 2011 Best of the South selection by the Atlanta Journal Constitution and was a 2012 Townsend Prize finalist. Her newest novel, MRS. POE, examines the fall of Edgar Allan Poe through the eyes of poet Francis Osgood.