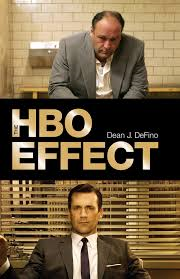 The HBO Effect by Dean J. DeFino is a Bloomsbury Academic publication released in November 2013. I was provided a copy of this book by the publisher and Netgalley in exchange for an honest review.
This is a non-fiction account of HBO's history, it's impact on the way we view television today, and it's future. It might surprise some how long HBO has been around. The cable and satellite staple never thought of itself as being a television channel. They were content providers before that term ever made it into our eveyday conversations. The channel originally aired in the evenings only. Eventually it bacame a 24 hour station, one of the few at the time since most network channels went off the air in the wee hours of the morning, signing off with the Star Spangled Banner.
I remember the first time I ever viewed HBO at a relative's home. I as in awe of the concerts, the stand up comedy and the movies which ran commercial free and uncut and unedited. The sports programs though were what really put HBO on the map. Linking up via satellite to bring the historical boxing match between Ali and Frazier to any who were able to get HBO created the biggest buzz. But, HBO had to fight a few battles before they could go on air. There was an uproar over paid television with the networks fighting against it tooth and nail. HBO did have a great deal of luck though. They managed to romance the FCC, and certain rules and laws that occured in the Nixon, Ford, and Reagan administrations helped open the door for HBO and other cable channels. The AT&T co-axle cable gave the channel access to broadband when most channels were hampered with UHF or narrow band. HBO was also fortunate to have attracted corporate sponsors with really deep pockets which helped them stay way ahead for the competition that eventually came along like Showtime and the Movie Channel.
HBO managed to adapt and change and were always willing to take risk. Original programming got it's start with HBO. Sex and the City, Six Feet Under, The Sopranos, and The Wire had the advantage over network programming because they weren't bogged down with advertisers, and huge conglomerate of big broadcast networks. Being allowed to show sexual content and use course language and depicted life in a more realistic manner because of it, attacted audiences, but the quality of these shows were what kept them going. Stellar writing and acting set HBO's original programming on pedestal few , if any could emmulate.
This period in HBO's history changed television viewing forever. With the popularity of arguably the best show on television ever- The Sopranos, cable networks from Showtime to FX and now even Netflix and Amazon and Hulu all offer original programming. If it weren't for these outstanding programs on HBO, Mad Men and Sons of Anarchy and many others would probably have never seen the light of day.
Yet, once more HBO had to continue to move forward and out of the intense drama series they were putting out and managed once more to come out on top with Game of Thrones.
Originaly programming isn't HBO's only claim to fame of course. Many still pay for the channel because of the sports and the boxing in particular. The stand up comedy routines made stars out of people like George Carlin who became synomous with HBO comedy. Comedians were not restriction to a ten minute late night talk show routine, nor were they restricted in what language they used.
HBO has alway been right on top of any piracy issues as when satellite dishes began to become popular in rural areas where cable was not available. When HBO realized these people were watching their content free of charge they managed to get permission, as well as other cable channels to have their signal scrambled. HBO has fought long and hard with Netflix by keeping their content exclusive.
However, at this moment in time it would appear that HBO is at a crossroads. They have backed away from taking the risk that set them apart from many others. It's not clear what the future holds for the cable giant. HBO has always managed to land on it's feet, but they may end up having to make a few concessions if they want to stay in the game. In my personal opinion they have gone just a little bit overboard by not allowing Netflix access to their DVD library at all . For me personally, I refuse to pay fifteen dollars a month for one channel which has one show I like on it. I've already seen Crimson Tide 6000 times. So, it would be cheaper for me to buy the DVD box set of the show, watch it, and then sell it on Ebay. I think HBO could lighten up a little in that regard. There isn't a show on television anywhere worth fifteen dollars a month for a measly 13 episodes. But, that's just me.
This is an interesting book with lots of interesting insights and a fun look back at some of the groundbreaking events and documentaries and programs as well as the impact HBO has had on our viewing habit. This is fascinating read and if you like pop culture, are a television enthusiast, or just like reading about sucess stories, then you will find this book appealing. Overall I give this on a B+ 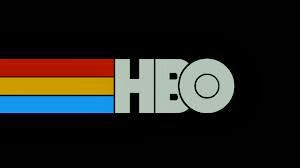 Blast from the past HBO logo.

The Best show on television- ever?
Posted by gpangel at 10:37 AM