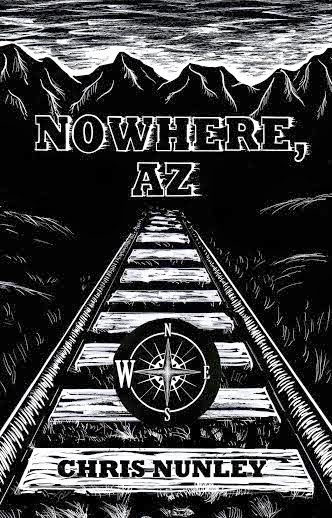 Publisher: CreateSpace, Sept. 30, 2012
ISBN: 978-1478352969
Category: Thriller/Suspense/Mystery
Tour Dates: January/Early February, 2014
Available in: Print & ebook, 149 pages
"Always going somewhere. Never getting anywhere."
Negative energy haunts the nameless Narrator, who's been on the run for twelve years. A convicted killer on the loose, he has no one left to rely on and no place to call home, so he heads west.
"Those who will remember will say it's all my fault."
He has no control of what he's capable of and does his best to avoid any type of confrontation at all costs.
Words are said, things are done. Friends turn into enemies.
"They call me a monster."
Just as he's about to reach his destination, his past starts catching up quickly.
Praise for Nowhere, AZ:
"Excellent Read! Just when I thought I figured out what was going to happen, it changed on me. I like when that happens. The author was one step ahead of me!"-Dennis, Amazon Reviewer
" I enjoyed Nowhere Arizona very much. It's a unique concept that has a trace of Torchwood in it. It's dark and it's fun and makes you think about how you treat yourself and those around you. It's a pretty quick read and would be good for travel. To say it's a new spin on tit for tat would be an understatement. What would you do if the safety of all those around you depended on them treating you benevolently? And at the same time you discover that your whole life is essentially one big lie? When the bodies start to pile up, we start to get some answers to those questions."-Angela, Amazon Reviewer
"Not all books have the ability to engage the reader in a way that makes you constantly try to guess what is really happening. That finds you constantly guessing what is really going on while your turning the pages. The author tells a story that takes place both in the present and in the past. Both story's are converging towards the truth of how the main character has become the person that he himself fears and the truth of who he really is. I found it very difficult to put this down because I was always left thinking about what I had just read. My curiosity was so piqued by this story that I had to have the answers, I had to know what was really going on. This is a story that left me wanting to know what the main character's future would be and ready to read about his next adventure if the author produces a sequel."-Paul R. Ryan, Amazon Reviewer
"Nowhere, AZ is quite the read! The author begins by entangling the reader into an unusual set of events which undoubtedly spike an enormous amount of curiosity! One must read on to settle this feeling, but surprisingly, and wonderfully, it doesn't end until the book does. As each new clue emerges, the reader becomes a detective as to the past and present of the main character...the twists, turns, and excitement never seem to end! It would be beneficial to start this book when one has a bit of free time because there is NO putting it down! Definitely a MUST READ!"-Meg, Amazon Reviewer
About Chris Nunley:
Chris Nunley has been writing ever since he could put a pen to paper.
In tenth grade, he wrote a spec episode of "Seinfeld" for his creative writing class, and realized that writing wasn't an assignment, it was a passion. He went on to write several other screenplays, including an adaptation of Albert Camus' "The Stranger."
Chris graduated with a degree in Screenwriting from Loyola Marymount University in Los Angeles, then went on to work for the television show "MADtv" as a Writers' Assistant as well as selling material as a Contributing Writer.
His first novel "Nowhere, AZ" - a story about karma and its implications, as well as his second novel "The Pouch - A Story About Sacking Up" are both available for purchase as paperbacks or for a Kindle device at Amazon.com.
Website:http://nowhereaz.com/
Twitter: https://twitter.com/NunleyWriter
Facebook: https://www.facebook.com/NowhereAZ?ref=hl
Goodreads: http://www.goodreads.com/book/show/17724978-nowhere-az?from_search=true
Pinterest: http://www.pinterest.com/chrisn48/
MY REVIEW:

Nowhere, AZ by Chris Nunley
My rating: 4 of 5 stars

Nowhere, AZ is a 2012 self published novel written by Chris Nunley. I was provided a copy of this book by the author in exchange for an honest review.
A man traveling constantly, unable to settle, narrates this story explaining his rather bleak life to us. If our story teller were to become stressed, threatened, or bullied in any way, it could be a bad deal for the person causing him distress. So, keeping this guy on an even keel would be a good idea, and that's what our narrator attempts to do. It 's kind of like that line in the old Incredible Hulk TV show- "You wouldn't like me when I'm angry". It's not like our guy goes out looking for trouble. Trouble does come calling from time to time because life is full of those incidences when we are faced with a situation out of our control and we have to defend ourselves or in some cases the honor of others.
If that weren't enough to deal with we find out this poor guy has not been told all there was to tell about his family and who he is which brings him to a terrible place in his life.
The name of our protagonist is never revealed throughout the entire story. The first person narrative decribes the guy's life in the present and in flashbacks which bring us finally to a crossroads. Where could this person find any peace? Will he settle in the aptly named Nowhere?
A very dark, paranormal tale the gives the reader a lot to ponder. This book is in between a novella and a novel in length with about 148 pages. So, the story moves along at fair clip telling one odd encounter after another until a sort of climax occurs which changes everything . It is really hard to write reviews for this type of book because it's hard to explain things without giving away key information about the plot. It is also a story that just has to be read for one's self. I happen to enjoy a dark and twisty tale from time to time and this one will certainly keep you engaged. I rather liked it and thought the author did a great job of building his nameless protaganist into a character we care about even though he is quite dangerous. There is a cast of secondary characters that add to this story by being a bit "out there" and so they play their part very well in this sort of story. If you like paranormal, horror, anything that requires a little thought, or your looking for something a little out of the ordinary you should check this one out. I 'm going to give this one an A.

View all my reviews
Posted by gpangel at 6:30 AM