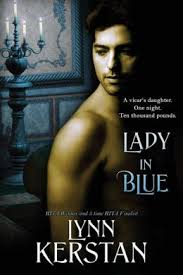 Lady in Blue by Lynn Kerstan
My rating: 4 of 5 stars

Lady in Blue by Lynn Kerstan is a 2013 Belle Bridge publication. I was provided a copy of this book by the publisher and Netgalley in exchange for an honest review.
Bryn watched both of his parents die of syphilis. Seeing first hand the ravages of the disease, Bryn, the Earl of Caradoc, has decided that until he is married he will only take a mistress that is a virigin. She will remain faithful to him until the relationship ends. Bryn has a madam he employs to help him find these women. The only one she can find for him is selling her viginity for an exorbitant price.
Clare is in dire straights and is running out of options. She needs a large sum of money and knows of of only one way to obtain it. Her motives are not selfish, she is not trying to earn the money for herself. The goal is to make a swift transaction and then move on. But, the man who is considering forking over her asking price has more in mind than a single night together. Bryn wants to set her up as his long term mistress and also wishes for them to have a relationship that is more than a sexual transaction. He wants her to desire him as he does her. However, Clare is too worried about the initial encounter and the prolonged relationship with the Earl she hadn't counted on to even consider enjoying Bryn's company outside of he bedroom.
To complicate matters, a young woman of the ton is elible to marry and of course Bryn is a logical choice. However, he is too obsessed with Clare to think of marriage, although if he must to save the girl from her tyrant of a father is supposes he would, but his friend is really the one in love with her. Either way Bryn is not about to let Clare go.
Will Bryn learn the real reason Clare has offered herself up to him? Will Bryn marry to protect a girl from violence or is there a chance Bryn and Clare could really have a chance at a love match and a Happy Ever After?
Orginally, this novel was published in 1995. Belle Bridge Books has reissued the book in digital format.
The set up is unique in that the Earl who would have had no problems satisfying his urges the way most single men of this time did. But, because of his experience with his parents he isn't about to risk dying the way they did or speading the disease further. This makes things a bit more complicated for the Earl. Once he sets his sights on Clare he knows he must have her, but he doesn't want a cold business transaction. He treats her very well, but Clare doesn't want to stay with him as his mistress. He does everything in his power to make sure she stays. As secrets and manipulations come to light it is possible Clare could be in danger.
While both Clare and Bryn know deep in their hearts they are falling in love, neither of them will admit it to themselves much less each other. When a dangerous situation arises the two will realize how short life is and maybe, just maybe they will be able to put their class differences aside and the other issues that cause Clare to hesitate can be worked out for everyone.
This novel has some interesting passages about birth control and the set up between the upper classes and their mistresses. Once Clare had become involved with Bryn she considered herself unable to marry him because some from his station in life couldn't possibly marry his mistress. I'm not sure about the accuracy of the birth control methods used as in drinking herbal potions, but the sponge method was something I could believe was realistic. I found that very interesting.
I knew Bryn was smitten with Clare from the beginning. I enjoyed watching her wrap him around her finger without even realizing the effect she had on him. The chemistry was good, the romance as steamy and sensual. I enjoyed the book and I am really happy to see these older titles being given new life in the digital world.
This one is a B.

View all my reviews
Posted by gpangel at 8:00 AM