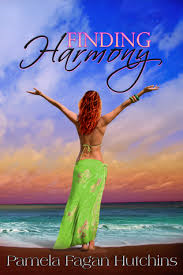 Finding Harmony by Pamela Fagan Hutchins
My rating: 5 of 5 stars

Finding Harmony by Pamela Fagan Hutchins is a February 2013 release. I was provided a copy of this book by the author in exchange for an honest review.

Since we last visited Katie, she has become a mother to TWINS! Can you believe that? Wow! She and Nick are living in San Marco and doing the married life thing until a man is found dead in their driveway. Initially, suicide is the ruliing, but NIck and Katie do not think that is the case. They agreed to work on finding out what really happened to Eddy. But once they start asking questions, Nick becomes secretive and begins to shut Katie out.
To make things even worse, Eddy's wife, Elena is a very attractive and Katie is still battling baby weight, feeling a little frumpy. With Nick behaving oddly, and the rumor that Eddy killed himself as a message to Nick, Katie is trying really hard not to draw the wrong conclusion.
When Nick leaves one morning and never comes home, his cell and all other resources for communicating with him, gets no response from him, Katie knows beyond a doubt that he is in serious trouble. Enlisting the aid of her father in law, Katie goes in search of Nick. With the help of Annalise and some very vivid dreams, Katie begins to think she may know how to find him, but the chances that he is still alive are not too good. Will Kurt and Katie find Nick before it's too late?

This third and possibly final chapter in the Katie and Annalise series was the strongest in my opinion. The mystery of why Nick disappeared, why Eddy was murdered, and then the harrowing search for Nick will keep you on the edge of your seat. My palms were sweating I was so nervous. The author does a great job of creating this unbearable suspense. Katie is frantic. Her mind is telling her that Nick didn't just run away from home, that he is in terrible danger, maybe injured, but her heart is breaking because she knows he was dishonest with her and he shut her out of this investigation and she is told Nick as was worried about her weight. But, the dreams she is having helps convince her that Nick has uncovered the truth about Eddy's death and someone wanted to keep him quiet.
The plot Nick uncovered was really clever, and plausible. While I was all kinds of PO'd at Nick for putting Katie through everything he did, I was very proud of how Katie handled things. She was able to reign in her infamous temper, stay clean and sober under duress, and proved how very far she has come since we first met her.
The best part was that the mystery of Annalise is revealed and the ending is indeed wide open.

I AM SO THRILLED TO HAVE KATIE STOP BY THE BOOK REVIEW TODAY TO ANSWER A FEW QUESTIONS FOR US! WELCOME KATIE!!

1) Katie, did you ever see yourself being married with three children?

Never, and I mean never, did I see myself with three kids. Married, sure, to a guy who worshipped me and showered me with diamonds and emeralds, but not as a mommy. I’m not exactly the domestic type, and I thought moms evolved from the girls who dressed up their Bessie Wessie baby dolls and played house in little pink aprons, not ones like me who competed in martial arts and grew up to become the butt kicking goddess of the St. Marcos rainforest. I’d always believed I’d fulfill my mother’s lost dream of being a lawyer, which didn’t jibe with children. Well, to my surprise, I got to do both. An even bigger surprise, though, is that I’m the mom to another woman’s son, you know? And how much I love it, all of it. I really, really do.

2) Will you continue to live in Annalise?

Oh, I hope so! We had to leave her once, and it did not go well for any of us. It’s where my heart lives, where I became a better version of myself. How do you leave that, willingly anyway? But I’ve already admitted I never saw my life turning out the way it has, so I guess that means I’d be an idiot if I tried to tell you I know what’s coming next. I will just pray we get to stay here, with Annalise, not only because we love her, but because hell hath no fury like a jumbie scorned.

3) Do you think you will ever go back to being a full time attorney? Do you ever miss it?

Wow, you’ve just asked me a loaded question. I get this one all the time, and I’m like, "Did you SEE the Youtbube video of me in the courtroom? HelLO, I was a trainweck of a lawyer." But, if the right case came along, and I could work with Nick, then maybe. Maybe. If I ever get over my fear of committing egregious malpractice.

My brother is busy being his badass self, God love him. He’s remodeled our old family home in New Mexico and modified the whole thing to Green standards, even to where he can live sustainably off-the-grid. This cracks me the hell up. Super cop turned granola boy. I think he must be doing it to impress a woman.

5) Do you ever read novels? If so what do you like to read?

I have started reading since the twins were born, which is weird, because I have less time than ever. Something about them made me feel more connected to other women--to the great bond of motherhood--and to my girly emotions. I have been reading Jodi Picoult and recently I picked up Lisa Scottoline’s new fiction. Yeah, I keep a box of Kleenex by me at all times.

6) What is your secret to learning to go with what life throws at you?

Well, it isn’t Bloody Marys and Rum Punch Painkillers anymore! This is one of my challenge areas, unfortunately. Some people have accused me of being a little high strung, and I guess that I am at times, but there’s a lot to worry about, you know? Nick, the kids, Annalise, my brother, my in-laws, and all the people in our wake, like Pumpy, and Derek, and the whole network of people that moved in Gregory’s world. Note to self: keep a lower profile.

7) What do you think is in store for Ava in the future?

Ava will always be Ava, which, to my mind, is a problem for her and everyone that loves her. And I do. Love her that is. I really do, even though I’m still mad at her for deserting Annalise, and she is an incredible flake, an incurable flirt, and prone to thoughtless behavior. But she’s got this something, this thing that makes her irresistible, and I know that there are great things in store for her. I’m hoping it’s love. If not, maybe she’ll finally land that record deal she’s always wanted.

8) How do you feel about your story being shared with so many people?

How do I feel about my worst moments becoming fodder for the public grist mill? It hasn’t made me happy. Everybody pretty much thinks I’m a nut job. A hysteric. A basket case. But I like to think I’ve matured and that people are going to see that in Finding Harmony. Marriage and children have steadied me. I’m centered, and very little really rattles me anymore. {No, really.}

9) Where do you see yourself in 3 years?

Chasing three-year olds and carpooling Thomas to school! I hope by then Nick and I have really built up Sting Ray Investigations. I am so in love with this business. It’s way more fun than lawyering, and my co-worker is hot. Oh, and I’d like to be back in my skinny jeans. Having the twins expanded my butt as much as it did my life.

I’m partial to this one: "I'm selfish, impatient and a little insecure. I make mistakes, I am out of control and at times hard to handle. But if you can't handle me at my worst, then you sure as hell don't deserve me at my best."

Thank you SO much for stopping by today Katie!  I have enjoyed getting to know you and I wish you all the best!!

Check out Katie's story from the beginning:


Finding Harmony by Pamela Fagan Hutchins ( also available in paperback)
Kindle
$4.99
Posted by gpangel at 2:00 AM