DEATH BY MISADVENTURE BY E.E. SMITH REVIEW AND INTERVIEW

Death by Misadventure by E.E. Smith
My rating: 4 of 5 stars

Death by Misadventure is 2013 Phoenix International publication. I received a copy of this book from the publisher/author and Rebel Song Promotions in exchange for an honest review.

Alexis J Smith is a young lady ahead of her time. The story takes place in the 1940's when ladies didn't work, much less become private detectives. But, after her husband dies during the war, Alexis feels free to pursue her dream.
When her old high school friend, Katie shows up and wants to hire Alexis to find her husband and daughter, Alexis is stunned to learn that Katie's husband is Frank Faraday. Alexis was over the moon for Frank back in high school. But now Kate was trying to tell Alexis that Frank had run off to England with their 5 year old daughter and she not only wants Alexis to find Frank, but to kill him when she does find him!!
While Alexis has no intentions of killing Frank, she doesn't want Kate to hire someone who might. So, she takes off to England in hopes of finding Franks before Kate does.

With a little help from "The Yard" a really nice investigator named Harry, Alexis finds Frank is staying at an inn that is allegedly haunted.
With a ghostly apparitions, and Kate hot on her trail, Alexis is running out of time to find out what is really going on with Kate and Frank.

This is E. E. Smith's first mystery novel. This book is a part of a planned series, featuring Alexis Smith.

I loved the historical nature of the book and the setting. It was a British detective novel without being a British detective novel. An American in England if you will. Alexis is a character we can learn to care about and has room to change and grow with subsequent installments in the series. With a possible romance on the horizon, Alexis could even become part of a team.

Although women were not usually detectives or carry guns, Alexis doesn't dwell on that. She also doesn't attempt to talk tough or act like a female Humphrey Bogart, although she is obviously a fan.
So, the novel doesn't try to fit into any preconceived mold. Much of it's charm is in it's originality.

This mystery will appeal to all mystery and crime novel readers, but it could appeal to a certain group of cozy mystery lovers as well. No graphic violence of rough language.

Overall I really enjoyed this one. Overall this one gets an A.

I am happy to have E.E. Smith with us today at The Book Review!  Welcome! 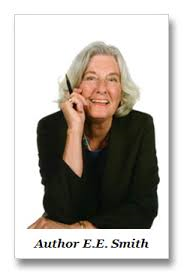 1) You are an accomplished playwright. You have also written novels and short stories. What inspired you to write a mystery novel?
I love to read mysteries, but find that I'm not satisfied with most of the ones I pick up these days.  So many really good writers, such as Dorothy L. Sayers, are gone.  One day I decided that I could write a better mystery than the one I was reading at the time, and started to write  Death by Misadventure  the next day.  I had no intention of writing any more of them, but I kept thinking of situations that my "girl gumshoe" might get herself into, which is how it evolved into a series.

The British love their ghosts, and there really is a 12th century spirit who haunts St. Peter's Church in the village of Brooke, Norwich, and the Old Vicarage next door (now a bed and breakfast owned by friends of mine).  The story goes that she was a low-born servant girl who jumped to her death from the tower of the church, but her spirit still roams the grounds, dressed in a long gray cape.  I never saw her in my many visits to the Old Vicarage, but others have.  My friends tell me that she nearly frightened the paper boy out of his wits when he observed her walking through the stone wall that separates the churchyard from their property.

3) The 1940’s is an interesting period of time to write about. Why did you decide to set your mystery novel in this time frame?

It is a very interesting period, not only to those of us who lived through it -- the Second World War being an unforgettable part  -- but surprisingly to many younger people today.  Moreover, it's an era I know a lot about, first hand, and one that is so different from today that it's fun to recall a way of life without computers and jet airplanes, and to throw in references to streetcars, dial telephones, fountain pens that use real ink, the cost of gasoline (25 cents a gallon), and the "New Look" from Christian Dior.

4) Alexis is a woman before her time. Was her character patterned after anyone in particular?

I have to confess that she is patterned after me.  Not as I really was, but the way I wanted  to be!  My girl gumshoe is fearless, even when tangling with infamous spy agencies like the British MI5, the Russian KGB and the American CIA. I have always been a worrywart, afraid that the sky may fall at any minute.  Alexis carries a gun and knows how to use it.  Guns and weapons of any kind terrify me.  (In the latest book she faces down an Irish Mafia assassin wielding a seven-inch switchblade.)  She is what I would have liked to be, but never was:  a person who "rushes in where angels fear to tread," as Harry Hawkins, her detective friend at Scotland Yard, frequently reminds her.

Several places.  My website is:  www.eesmithwriter.com.  My publisher, Phoenix International, Inc. has a website with a link to mine:  www.phoenixupub.com.  I can be followed on Facebook, and also reached by email:  caboose.smith@earthlink.net.

6) What are you working on now?

I'm trying to finish writing  Prescription for Murder,  the fourth book in the "Alexis J. Smith, Discreet Inquiries"  series, which is due out in August of 2014, after Bad Blood  (in February) and Russian Roulette  (in May).  I also write a regular blog for Psychology Today  which can be read by going to: www.psychologytoday.com/blog/not-born-yesterday.

Here's one from my father, who was an expert poker player:  "Trust everyone.  But always cut the cards."
ABOUT THE AUTHOR:
E. E. (Evelyn Eileen) Smith lives close to her native San Francisco, in the "Wine Country" of northern California. She became a professional writer after retiring from earlier careers as an architectural designer and a litigation paralegal. Known primarily as a playwright at first -- her plays have been produced in Massachusetts, Kentucky, Oklahoma, and both northern and southern California -- she later became a novelist. A New Edition of the first novel, Boardinghouse Stew, along with the sequel, Times Like These, was published in 2011. In Love and War, A Memoir, followed in 2012. A series of murder mysteries will debut on November 29th of this year. The first in the series is titled Death by Misadventure. Three more will follow in 2014.
She is a regular contributor to Psychology Today. To see her blog, go to
www.psychologytoday.com/blog/not-born-yesterday.
Her website is  www.eesmithwriter.com.
Also follow her on Facebook. https://www.facebook.com/ee.evelyn.smith?fref=ts
Posted by gpangel at 4:00 PM