ALL OF US WERE SOPHIE BY RESA NELSON 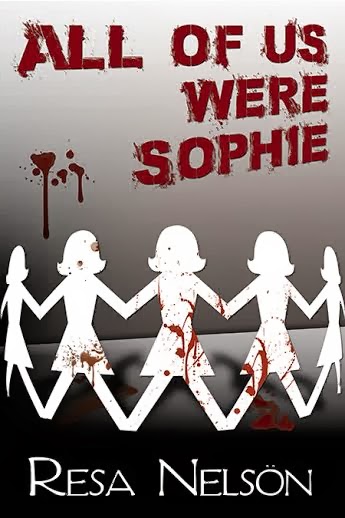 Synopsis for All Of Us Were Sophie
What if the only way you could save your own life was to kill yourself?

Someone is trying to kill Sophie Rippetoe, and she has no place to hide. But Sophie has a unique option. Her husband designed and built a duplicator machine to make exact copies of complicated and sophisticated machine parts. She knows how the duplicator works.

Will it work for people? No one knows.

There’s just one problem: the duplication process destroys the original. The only thing Sophie knows for sure is that trying to make copies of herself will end up killing her.

Sophie isn’t sure who’s trying to kill her or why – but she has her suspicions and has gathered some evidence. Before she takes the leap of faith to use the duplicator on herself, she creates a trail of clues, hopeful that at least one of the Sophies she creates will figure it out in time to save herself.

All of Us Were Sophie by Resa Nelson
My rating: 5 of 5 stars

All of Us Were Sophie by Resa Nelson is a 2013 Mundania Publication. I as provided a copy of this book by the author in exchange for an honest review.

Someone is trying to kill Sophie. In order to find out who and why, Sophie sacrifices herself by using a duplicator to make more Sophies. Each duplicate has a piece of the original Sophie. They will all have to work together to figure out what was going on in the weeks prior to Sophie's decision to take drastic measures. Sophie's husband Jack was working on a duplicator and of course this was all top secret. He had secrets he had not shared with Sophie and Sophie had secrets she didn't tell Jack about. There were a myriad of possibilities .
When a woman calls the police claiming someone has tried to kill her, Jeromy is called to the scene. Working in the sleepy bedroom town of Hounslow was not where Jeromy had intended to land. He had opted for a place to raise his daughters and be more of a family man. After his wife died, it was more important than ever for his daughters to be a safe community environment. But, he would take the crime of the big city any day over the strange situation he has gotten himself into with this woman named Sophie. She claims someone is trying to kill her and that she has no memory of the last two weeks.
In the meantime the duplicates have given themselves unique names and are trying to follow the evidence the original Sophie left for them so they can prove who was trying to kill her.
The synopsis for this book will have your interest peaked to say the least. This novel is a very creative, intricate, and quirky science fiction and mystery combination. The duplicator wasn't really intended to be used on people, but it does work in ways Jack could never have imagined. As the story progresses we see multiple layers of Sophie's life prior to her duplication. She had a close relationship with her husband's friend, Ben. There were signs the relationship was more than platonic, and it puts Ben on the suspect list, as well as some rather unique neighbors of the Jack and Sophie's. With only bits and pieces of the puzzle, the Sophie's race against time to find the truth before one them becomes a victim .
I will confess that science fiction is certainly not my go to genre. In fact, it's pretty far down the list. Mysteries however are always at the top of my list. So, I had to see for myself how all this was going to play out. I was a bit concerned I was going to have trouble following the plot, but trust me, this is an easy to follow story without a lot of technical science fiction speak. The emphasis is on the investigation, the who and why of Sophie being on someone's hit list, and the drama that unfolds as more information is leaked out. I loved the wry humor the other Sophies had and the way the author gave each duplicate a special part of the original Sophie. Naturally, there is the question of what the long term consequences might be for the duplicates and the problems they would face if anyone ever discovered the truth about them. The novel also has a whimsical quality , a feeling of being surreal, and had me caught up in the story as though I were a part of it. I love it when that happens. I enjoyed the escape from the mundane for awhile and loved the creativity and obviously well thought out plot. Very well done. This one is an A+

AUTHOR INTERVIEW:
Resa Nelson has been kind enough to take time out to answer a few questions for us today. Welcome Resa! I'm so happy you could join us!


That which does not kill me makes me stronger.

Thank you SO much for stopping by today!

You can contact Resa or find her books by using the following links:

Ebook ($4.99) and trade paperback ($12.95) are available directly from Mundania Press at: http://mundania.com/book.php?title=All of Us Were Sophie
(get a 10% discount at checkout with the coupon code MP10)


Paperbacks and ebooks are available also from Amazon, and Barnes&Noble:
http://www.amazon.com/All-Were-Sophie-Resa-Nelson-ebook/dp/B00HEVBT5S/ref=tmm_kin_swatch_0?_encoding=UTF8&sr=8-1&qid=1391905736 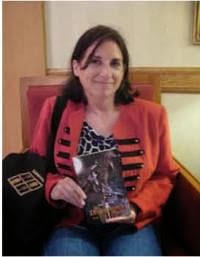 Resa Nelson’s first novel, The Dragonslayer’s Sword, was nominated for the Nebula Award and was also a Finalist for the EPPIE Award. This medieval fantasy novel is based on a short story first published in the premiere issue of Science Fiction Age magazine and ranked 2nd in that magazine's first Readers Top Ten Poll. The Dragonslayer's Sword is Book 1 in her 4-book Dragonslayer series, which also includes The Iron Maiden (Book 2), The Stone of Darkness (Book 3), and The Dragon’s Egg (Book 4).
Resa's standalone novel, Our Lady of the Absolute, is a fantasy/mystery/thriller about a modern-day society based on ancient Egypt. Midwest Book Review gave this book a 5-star review, calling it "a riveting fantasy, very highly recommended."
She has been selling fiction professionally since 1988. She is a longtime member of SFWA (Science Fiction and Fantasy Writers of America) and is a graduate of the Clarion SF Workshop. Resa was also the TV/Movie Columnist for Realms of Fantasy magazine for 13 years and was a contributor to SCI FI magazine. She has sold over 200 articles to magazines in the United States and the United Kingdom.
Resa lives in Massachusetts. Visit her website at http://www.resanelson.com and follow her on Twitter @ResaNelson.