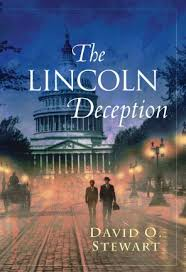 The Lincoln Deception by David O Stewart is an August 2013 Kensington publication. I was provided a copy of this book in exchange for an honest review.

It has been thirty-five years since Lincoln was assassinated. Now, Dr. Fraser, a small town country doctor from Cadiz, has heard a death bed confession from the lawyer that prosecuted the Booth conspirators, and a certain Mrs. Surratt. When asked by the man's daughters to put their father's professional papers in order, Fraser becomes obsessed by the confession and in uncovering a conspiracy.

Along the way the doctor meets up with a black gentleman that runs a small newspaper. The two become partners attempting to unearth long kept and explosive political secrets. They travel the country, going wherever a lead might take them. They get into a few scrapes as someone attempts to warn them off. The good doctor also meets an enchanting woman and falls under her spell.
The theories Cook and Fraser toss around include the involvement of the Catholic church, obviously the Southerners, the confederates and maybe even someone close to the president. In the end, the truth will cause a dilemma for Fraser and Cook. Will they tell what they know or will they decide to keep the secrets that could knock the nation off it's axis?

This was a compelling mystery that begs the answers to some obvious questions concerning Booth as the brain behind the assassination. Too many holes were left open, but the case was closed and for as far as most were concerned the right man was killed for the crime and his cohorts were hanged. The End... but maybe not.

I loved the characters in the book. Cook was a real tell it like it is fellow and pulled no punches. Fraser was a bit more diplomatic. However, when all was said and done the two men had forged a life long friendship despite their differences of opinion. Fraser, a widower, who had lost his wife and child in childbirth, had a hole in his life he was at a loss how to fill, until he met Eliza, a friend of the Booth family. It looks as if the two might be headed for marriage until Fraser discovers Eliza's darkest secret. Will he be able to accept her once he knows the truth?

The theories, like most conspiracy theories, ranged from plausible to ridiculous. The "truth" could really have been more accurate than people would want to believe. But, all of this is pure conjecture and it made for a great little mystery. The thing that tipped this one over to a four star rating for me was the character development and the bonds that grew from the most unlikely of situations. There was a little something for everyone in this one. For those of you that are interested in this type of thing - the language was very mild, there was no sexual content, or graphic violence. Overall, I would give this one an B+
Posted by gpangel at 2:30 PM