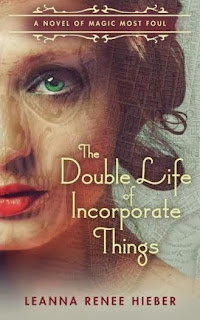 Just when we think our nightmares are over, the Society has invented a new horror. Around every corner a shadow, behind every whisper a demon. If we don't end what the devils began, we will die haunted..."

The Magic Most Foul saga takes a deadly turn as The Master’s Society unveils its next ungodly avenue of paranormal experimentation. First, souls were split from bodies. Then the dead were reanimated. Now, a mind-altering chemical has been unleashed in Manhattan. Demonic trauma and terror escalates for the dashing Lord Denbury and brave, feisty Miss Natalie Stewart. Together with their stalwart friends and unlikely heroes, they take the fight directly to the Denbury estate, where a collective evil has awakened. But are Natalie and Jonathon prepared for all the sacrifices that shall be asked of them? With their very lives and the sanctity of their mortal souls at stake, these lovers are past the point of no return...

I set the paper down slowly enough to see the thin edges shake as the full, personal impact of the newspaper article hit me.

"Natalie, what is it?" Jonathon asked, staring at me with those eviscerating blue eyes of his. I opened my mouth but no sound came out. Damn my unpredictable, inconstant voice.


For the past many months now, I'd been pummeled by one strange event after another, pulled into the center of a paranormal whirlpool. At least in this case, we had an inkling, some sense of the next onslaught. Still, a foreshadow was hardly a comfort. We couldn't have guessed the scope.
Now it wasn't just myself or Jonathon Whitby, Lord Denbury in danger, with the occasional collateral victim. Now it was a crowd. I knew the Association. I adored them. They weren't hooligans or criminals, they were gentle souls, artistic and individual. Overdramatic, yes, but a threat? Hardly. This maligning was the work of The Master's Society, turning lambs into lions in ungodly experiments, leaving them for fodder in sensational, indelicate journalism. It could only get worse. Exponentially worse.
"It's begun," I finally managed to reply quietly, sliding the paper across the lacquered console table behind the sofa toward Jonathon's reach. "Another phase. They've gone after the Association. And the papers will vilify those poor dears, every last one of them. Jonathon, the demons won't give up..."


The Double Life of Incorporate Things by Leanna Renee Hieber is a 2013 Deus Ex Victoriana publication. I was provided a copy of this book in conjunction with a book tour promotion.

This book is the finale in the Magic Most Foul series.
Jonathon, Lord Denbury and Miss Natalie Stewart will need to conclude their paranormal business before they can embark on their life together. Nathaniel and Livinia will join forces with Jonathon and Natalie to battle evil demons after their very souls. They will have to go directly to the Denbury Estate to face the ultimate evil. A precarious plan is hatched that will test the foursome beyond anything they ever faced in the past.

I will confess that I have not read the previous two books in this series. Often times that is not all that big of a deal. It's always best to read in order to get the maximum enjoyment from a series. However, it's not a deal breaker if you pick up a series in the middle somewhere. In this case though, I think it is best to read the other two before tackling this one. It's obvious that there is a past between Jonathon and Natalie and with other characters that play a role in this novel, but whose history is only alluded to. The presumption is that you know what has happened already and this book will not clue you in too much. If you want to know the history, you will have to go back and catch up. There is a great deal of information you will feel left out of if you have not read the other books. Having said that, this is a new adventure and it is easy to figure out the basic things you need to know in order to follow along. The writing is very descriptive and close to being "Gothic" in style. I love Gothic literature, but I often become frustrated that a paranormal element seems to define the current day Gothic novel. However, this novel is historical and the mood is absolutely atmospheric and creepy, and quite tense at times. I was really sucked in by the writing and loved the story.
I enjoyed Natalie's non-traditional attitudes, and Jonathon was so funny. His attempts at gallant romance were so awkward you will just want to hug him. He is quite honorable and is a true hero.
For those following this series, I think you will be very satisfied with the conclusion of the trilogy.
Over all this one is an A. 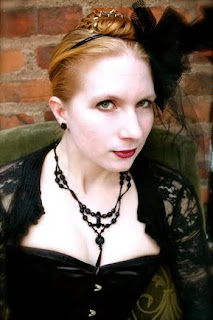