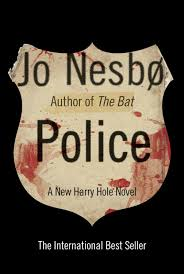 Police: A Harry Hole Novel by Jo Nesbo is a 2013 Random House publication. This book was translated by Don Bartlett. I was provided a copy of this book by the publisher and Edelweiss in exchange for an honest review.

When we last visited with Harry his life was in terrible turmoil. This book pretty much picks back up where we left off. Harry has recovered from his wound and is with Rakel and Oleg. He has given up the type of work that puts him and his family in danger. But when policemen begin dying at the crime scenes of unsolved murders, Harry is the first person everyone wishes were still on the team.
This case obviously hits close to home. The police have very little to go on except the possibility that an old nemesis they thought was dead, may actually still be alive. Harry gets drawn into the case despite his promise to Rakel.
There are several threads going on at once that show the political climate involving the chief of police, and an old acquaintance of Harry's is back to cause him trouble, hoping to come between Rakel and Harry.
As more of their own die, the team becomes desperate, always seeming to stay one step behind the killer. Once more Harry finds his worst nightmares coming true.

This is another great Harry Hole thriller. I think that in this installment, the author has taken the time to allow Harry some personal growth and I think it's long overdue. I think it's past time for Harry to face his issues head on and find some kind of peace. That doesn't mean he won't still have his nightmares and his demons, but I think Harry deserves a break from the dark turmoil that has ruled his life up to this point. Harry faces some temptations and is able to realize his own self sabotage in time to keep from messing everything up.
In the investigation, Harry once more proves he is ahead of the game and the best of the best despite his flaws.
I loved the ending of the book. It was bittersweet for sure, but a long time coming!
My one complaint about the book was that Harry was spoken of but did not make an actual appearance until 30% into the book. The team is only interesting when Harry is with them, and I had a little bit of a hard time getting into the book at first. Once Harry arrived on the scene though, the pace picked up and it was business as usual. This one gets an A.