ONCE UPON A LIE BY MAGGIE BARBIERI 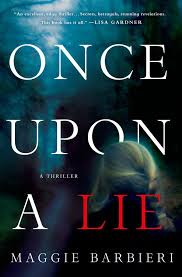 Once Upon a Lie by Maggie Barbieri is December 2013 Minotuar Books publication. I received copy of this book from the early review program at Library Thing in exchange for an honest review.
Maeve's life is far from fairytale perfect. Yes, she's a "soccer mom", but... she is divorced, her ex-husband, Cal, having dumped her for a high maintence younger woman. She is raising her two girls, one of which is going through some sowing of wild oats. Maeve and Cal at times do not agree on the right approach to parenting. She is trying to keep her bakery shop afloat, and take care of her father, Jack. Jack, a former police officer, is in an assisted living facilty suffering from alzheimers.
Maeve's assistant at the shop, Jo, is recovering from a divorce as well as from cancer treatment. Jo is nice, but sometimes she's not all that much help.
When Maeve's cousin, Sean, is murdered, Maeve is hardly broken up over it. In fact, it's all she can do to keep from dancing on his grave. But, when the police begin to investigate it becomes clear that Jack had pulled a disappearing act from the assisted living facility at the exact same time Sean was murdered. He quickly becomes a suspect.
If all this weren't tangled up enough, Maeve is a witness to a domestic dispute in her shop that has her very concerned for the wife and children.

I really enjoyed this book. This is a new to me author. This is a dark, twisty little story about abuse, family, grief, lies, secrets, and the realities of life and one woman's desperate attempt to keep her family safe.
This one is "outside the box" and we need more like it. Overall this one is an A+