ENTICING THE EARL BY CHRISTINE KELLEY 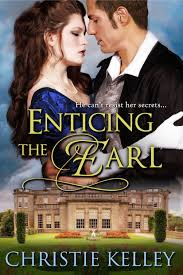 Enticing the Earl by Christie Kelley is a 2013 Kensington Publication. I was provided a copy of this book by the publisher and Netgalley in exchange for an honest review.

In Staffordshire, England in 1814- Mia, the daughter of a "healer" who wished to follow in her mother's footsteps, is in deep trouble. She has begun an affair with a man that was only using her to get to a treasure he is sure she knows about.
When the Earl, Simon Blakesworth discovers Mia beaten within an inch of her life, he brings her back to his estate to recover. Determined to find out who beat Mia and why he has the matter investigated, but no leads are forthcoming.
In the meantime, Mia slowly heals but finds that the Earl intends to propose marriage to her in order to protect her. Mia is not a lady of the ton and feels she is a poor choice of a bride for Simon. She has had other lovers and confesses them to Simon. Still he insist on marriage, although she makes him wait until she is sure she is not with child.
While Simon waits he struggles with his financial situation, the constant worry over Mia's safety and he knows she is keeping something important from him. He also worries she may have thought him rich when she agreed to marriage, and is plagued with doubts, but is also worried Mia may be pregnant.
Intrigue and betrayals abound and Simon will learn shocking truths about his own family before he discovers the truth behind Mia's attack.
Mia isn't the only one keeping secrets though. Simon also has been less than forthcoming about his past. If Mia knew about certain things he had done, she would may never agree to marry him.

I enjoyed this historical romance with a touch of adventure and mystery. I enjoyed the romance as well. Simon was not your typical Earl. He had many issues, one of which was a problem with numbers and doing math. The other issue is much darker. Mia was a pragmatist, but capable of great passion. She was good with numbers although uneducated. She really wanted to be like her mother and was hurt by her mother's favoring of her sister, Tia. After the beating she took, Mia is afraid of being with men. So, instead of wishing to trap the Earl, she tries give him ways out of the proposed marriage. What she doesn't know is that Simon has loved her all their lives and protecting her was an excuse he used to get her to agree to marriage. The road ahead of them was a bumpy ride, but Simon and Mia will learn to trust each other and they will finally have their happy ever after.
Overall this one is a B+
Posted by gpangel at 3:00 PM