A KISS FOR MIDWINTER BY COURTNEY MILAN 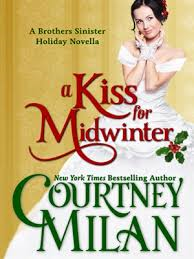 A Kiss for Midwinter by Courtney Milan was published in December 2012. This novella is part of the Brothers Sinister series.

When Lydia is all but fifteen years old, she fell pregnant. Her doctor passes judgment on her moral character and prescribes a cyanide derivative to combat morning sickness. A young Jonas stood by helplessly and hoped she would ignore the doctor's advice. He never knew what became of her.

Five years later, Jonas has decided he must marry. Not for love, not for children, but to have a steady source of sexual intercourse with risking a sexually transmitted disease. He makes a list of the top ten more beautiful women and then spies Lydia and she became number eleven on his list.
Lydia knows Jonas instantly, while he doesn't initially know her. Jonas has a tendency to tell the brutal truth and so offends Lydia right off. Jonas is rude and blunt and utterly in love with Lydia. She absolutely despises him. In order to make him go away she agrees to an unusual wager. If she wins he must go away and never speak to her again. If he wins he wants only a kiss.

This was a really different Christmas themed novella. Jonas at first is not easiest person to like. The more we get to know him and Lydia, the more we like him and we see how he only wants Lydia to stop hiding behind a mask of false cheerfulness and deal with her painful past. Lydia learns a good deal about Jonas and finds that while his truthfulness isn't always easy to hear, he doesn't lie to her and there is an attraction to that part of him after all. She also learns that as truthful as Jonas is, she is as untruthful with herself and her real feelings.

Overall I thing this one just get an A.