YOURS TO KEEP BY SERENA BELL 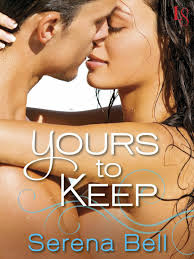 Yours to Keep by Serena Bell is a Random House/ Loveswept publication released in 2013. I received a copy of this book from Netgalley and the publisher in exchange for an honest review.

Ana and her siblings were born in the Dominican Republic. As children they came with their mother to the United States. When their mother died and their visas were expired, the children, the oldest being Ricky, stayed under the radar. If they were found out they could be deported and would have to wait ten years before they could reapply for a visa. The United States was all that Ana has ever known and she is terrified of being deported. She tutors students and adults privately, teaching them Spanish to earn a living.
Ethan is a pediatrician raising his teenage son alone after his wife died. He has been going through the motions of daily living, but has lost touch with his son. When Ethan and Ana meet, Ethan ask her to tutor Theo. She really needs the money so she agreed.
Having the young ,vivacious Ana in the house makes Ethan realize how empty his life has become. Ana also has a way of communicating with Theo. She opens a way up for the two of them to reconnect.
But, the looming problems with her visa and her over protective brother cause a lot of problems.
There are also a few side stories involving Ethan's patients and an exploration into his own ego and prejudices.

I was really undecided about my rating for this book. I liked the author bringing attention to the many complicated issues involved in obtaining visas and citizenship in our country. Ethan was likeable but sometimes he got on my nerves. He actually thought all the women in his community were hot to get in his pants. In fact, this thought almost caused a tragic misdiagnosis with a young patient. He also gave up on Ana too easily when he hit the first hurdle in the relationship. In the end, he does come through, and he learns things about himself and his son along the way.
As for Ana, I also had issues with her inability to take charge of her own life when it came to her domineering and controlling brother. I realize he was afraid for her, but Ana was old enough to make her own choices.
Theo was the one that seemed to have it together more so than the adults.
If I have my information correct, this is the author's first full length novel and if that is the case, then this is not a bad first outing. I think that with a little more practice this author will really come into her own.
I'm going to rate this one a 3.5 and my grade will be a C+.