WE WERE THERE BY ALLEN CHILDS MD 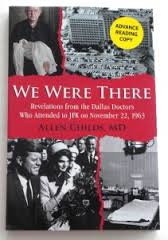 We Were There: Revelations from the Dallas Doctors Who Attended to JFK on November 22,1963 by Allen Childs, MD is 2013 release, published by Skyhorse Publishing.
I received a copy of this book from the publisher and Edelweiss in exchange for an honest review.

"It is said that the mastery of traumatic memory follows a course in which the trauma keeps intruding into consciousness until it is processed into less painful, less jagged, recollection. Curiously, highly pleasurable experiences keep intruding in the same way. By now we hope we have mastered the raw emotion of the time, but WHEN am I going to stop tearing up when I see the images of those hours?"

The images of JFK being assassinated is burned into our minds even if we not even alive at the time. I personally have been fascinated with this period in history for many years and have read countless books and watched countless documentaries concerning conspiracy theories etc. This book is the first of it's kind that I'm aware of. As we approach the 50th anniversary of the death of JFK, it amazes me that the doctors have the most incredible and vivid recollections of that day.
This a collection of these doctor's memories. They know where they were, what they doing, and those that actually worked on the president recall the efforts to save his life and what procedures they performed. There are heartbreaking stories about the first lady, and some explanations about why certain things were done and why that may have bothered some people, such as why LBJ insisted he would not leave on Air Force One until the president's body was on board. You can kind of see why those decisions were made, even if it went against normal protocol.
There a few excerpts of Arlen Spector's interview with some of the doctors, as well. The author does steer far away from any speculation about who was responsible for the assassination. This book is simply about the doctors and their personal experiences on that day.

Overall this is an interesting collection of memories from the people were actually there that day and saw the situation unfold in real time.
At times the retelling of events were a bit dry. Not all the recollections were interesting. However, for the most part I think you will find the stories give you a sense of how things happened once the president arrived at Parkland Hospital and the extreme shock of an entire nation.
Overall this one gets an A.