WANTED: ONE GHOST BY LONI LYNNE 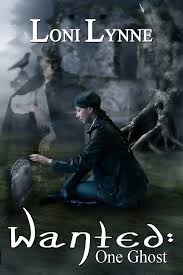 Wanted: One Ghost by Loni Lynne is a May 2013 release and a Crescent Moon Press publication.
I received a copy of this book from the author in exchange for an honest review.

James Addison has been dead for over two hundred years. He was executed for treason. Now Dr. April Branford has been hired by billionaire Kenneth Miles to find out if a certain piece of property was actually owned by his forebears. He has some plans for the property and is in a hurry to see who has the rights to it.
King's Mill has a long and storied history. April is not having much luck in her search for information about James Addison. On a ghost tour, April strikes up a conversation with a man she believes is a part of the tour.
Later, while speaking to her Aunt Vicki, she finds out that in reality, she has seen her first ghost. This is a gift all the ladies in her family possess. April and her mother have dreaded this day.
When April finds herself out on Halloween with the ghost of James Addison looking for his place of burial, a strange thing happens and James finds he is no longer a ghost, but a living, breathing man. Not only that, He and April have a connection that too strong to ignore.
The two of them work together with some help from the historical society, April's gifted family, and few people from the past to get to the bottom of who is the actual owner of the King's Mill property and why James ended up accused of treason and executed.

This is a mystery, a paranormal romance, and sort of a time travel/historical novel. Mostly light hearted and really funny when James tries to adjust to the independent women of present day. However, James does remind us of a time when men were gentleman in a good way.
April has a job to do and tries to stick to that, while she tries to enjoy every day she has with James. Since her gift arrived she also finds her aunt's house is very haunted, and April experiences some frightening encounters with some of them. Her investigation leads to some startling revelations about the past.
As things play out between the past and the present, April will have to believe in fate and have faith, because things are not always what they seem.
This was an outstanding debut novel. A sweet, sigh worthy romance that will leave you very happy with the way things turn out. Everyone involved gets what they need and the characters all grow through the experiences they have since James entered their lives.
Lovers of contemporary, mystery, paranormal, and time travel romances will all find this novel appealing. This one deserves an A.