THE MARRIAGE BARGAIN BY SANDRA EDWARDS 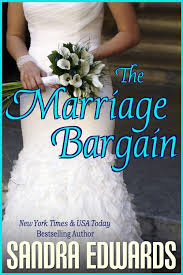 The Marriage Bargain by Sandra Edwards is SE Press publication. This was originally published in 2012 and released in digital format in April 2013. I received a copy of this book from the publisher and Netgalley in exchange for an honest review.

When wealthy Julian de Laurent places an ad in the L.A. Trades looking for a single actress for a job abroad, Margo Fontaine wants the low down for her magazine. She sends Camille Chandler to answer Julian's ad.
When Camille finds out what the job is, she declines. Margo insist she take the job or else. So, Camille choses the "or else". But with student loans bearing down on her, and no job, the offer Julian made begins to feel awfully tempting. And the offer? Marry him and stay married for 6 months. The payoff? Five million dollars!!
But, this job will be much harder than Camille thought. First of all, she isn't an actress, and the woman Julian is trying to avoid marriage to is not going to give up without a fight, and on top of that, Julian's father is backing her up. But the hardest part of the job is trying not to fall in love with Julian.
Camille's biggest mistake? Not telling Julian she lost her job and that she is not an actress.

This is a pretty basic contemporary romance. The set up of a brief marriage of convenience has been done many times over, but this one does have a fresh approach. There is a side romance with the secondary characters between Julian's brother and Camille's best friend. The other characters are Julian's controlling father, his ex- girlfriend, and his step-mother.
I read this book in one afternoon. It is a very light, easy read and perfect for a little romantic escape. I give this one a B.