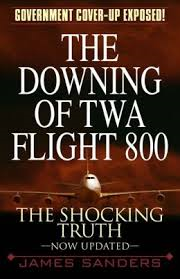 The Downing of TWA Flight 800 by James Sanders was originally published in 1998. This version is updated and available in digital format. I received a copy of this book from the publisher and Netgalley in exchange for an honest review.

This book shows us yet another example of a government cover up. I don't know why the government insist upon treating us like children. I don't think anyone really believed most of the bologna the FBI and so on tried to get us to swallow back when the plane exploded over Long Island. But, the media in all forms were fed information, the information they wanted the American public to know, not what really happened. In other words they manipulated the entire situation from start to finish. They were probably about to pass a brick, terrified that the horrible, tragic truth would eventually come to light.
The author is a journalist, his wife was actually a Flight attendant with TWA. This is where James began to become interested in this story. He paid a high price for his involvement.
Now I understood the author's theory of what really happened and what actually caused the jet to explode. I also think it's entirely possible.
Now, when the details began to get a bit technical, moving away from witness accounts and things like that, I will admit, I didn't exactly digest all of that. Formulas and chemicals and details that are important to the case, still went over my head a little.
There are pictures and documents included in the book as well.
A lot of disturbing things took place in the course of the investigation into the crash and the author had some rather disturbing experiences as well.
Now of course we are maybe jaded by all this information. It may make us angry and frustrated and if should make us feel sick, but I think we have become almost accustomed to being lied to and cover ups are something we know is happening more often than not.
This type of book might have you sitting up at night, not afraid of anything supernatural, but of things we have no control over from our very own government. Things haven't changed since TWA flight 800 crashed. The government still panics and tries to sell the public a load of you know what. In fact, it's almost like they just don't know how to do it any other way. It's all about covering their butt.
An interesting read, very well researched and very thought provoking and chilling.
I give this one an A.