THE DISAPPEARANCE BY J.F. FREEDMAN 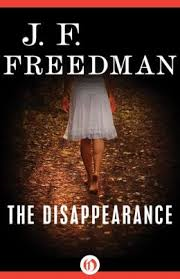 The Disappearance by J.F. Freedman was originally published in 1998. This book is now available in digital format and published by Open Road Integrated Media.
I received a copy of this book from the publisher and Netgalley in exchange for an honest review.
Luke was a high flyer in the D.A's office. He had a beautiful successful wife, was respected and admired by his colleagues. Then the worst nightmare a prosecuting attorney could ever face, happened to Luke.
Now he and his wife are divorced, he quit his job and is now taking cases for petty thieves and drug convictions. He live a long way for Santa Barbara with his girlfriend, Riva.
When an high powered TV executive's daughter, Emma, is kidnapped in the middle of the night from her own bedroom, then later discovered murdered, a local newscaster that was close to the family is accused of the crime.
A retired judge seeks Luke out and offers him the job of defending the accused. This would mean that Luke would have to face issues in his life he has been running from for years. It would also give him a second chance, not just career wise, but with life in general as well.
The story then moves on to Luke's defense, the lies, betrayals, secrets, and power struggles that come to light in the course of the investigation and a riveting courtroom scene.
If you like legal thrillers, and mysteries with lots of twist and turns and big reveals, you will like this one. This story is like an old school legal drama reminding in some ways of Steve Martini's style of writing. This one also has just a touch of modern noir as well.
There is little mention of modern technology. I think a cell phone was mentioned once. The story focused on the thoughts, actions and motives of those involved and on the legal process. I loved the courtroom scenes the most.
This was a very engrossing novel. It held my attention from beginning to end. You won't know what is really the truth until the very end.
Overall this one is an A.