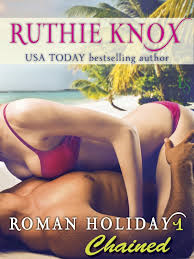 Roman Holiday: Chained by Ruthie Knox is a part one of a series. This is a short story/novella published by Random House / LoveSwept, and released in 2013.

Set in the Florida Keys, Ashley is overcome by grief for the loss of her grandmother and the shock of finding out that she had been sick and hadn't said anything to her about it. Not only that she has sold her property to land developer, Roman Diaz.
In an emotional and angry frame of mind, Ashley chains herself to a tree on her grandmother's property and refuses to leave.
At first Roman doesn't really take Ashley all that seriously. He thinks she will get hot, hungry and thirsty and give up before too long. Well, he doesn't know Ashley.
Meanwhile, while two of them negotiate the situation, a certain attraction to each other is undeniable.

This first installment of five sets the stage for what promises to be a really good story. Ashley is determined to keep the property in her family. She takes drastic measures and then finds that it maybe wasn't the smartest thing she's ever done, but her pride wouldn't let her give up.
Roman actually shows remarkable patience with her and proves he may not be as ruthless as Ashley believes him to be.
I am really looking forward to the next installment. (We were treated to a sneak peek of the second chapter). Ruthie Knox is fast becoming one of my favorite contemporary romance authors.
Overall this one gets an A.